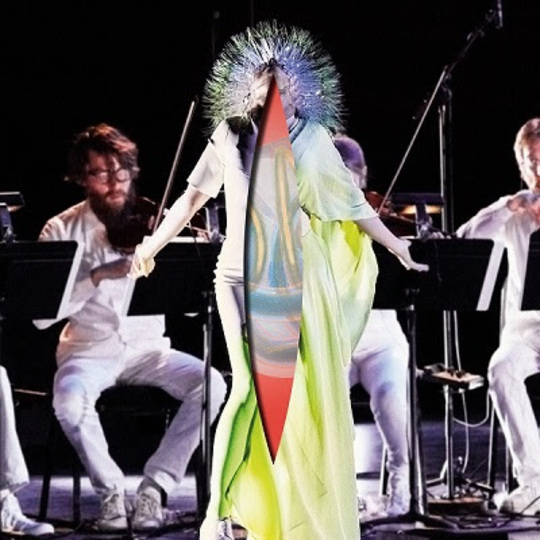 This is great. Vulnicura in its original guise is easily Björk’s most solemn record, and probably her strongest album since Homogenic. This orchestral rearrangement of the album actually reveals a sharper, more acidic base layer to the original, with some wonderfully large arrangements.

The press sheet mentions an old instrument designed (originally) by Leonardo Da Vinci, but really that’s to focus on the story, not the music; in this instance it’s a news hook and one that’s not essential to an assessment/enjoyment of the music.

The arrangements remain surprisingly true to the originals, and in some cases are just removals of the non-string instruments. There’s a jiggle in the track listing to push a sense of differentiation further. Whereas Vulnicura opens with ‘Stonemilker’, a perfect piece of contemplation, in Vulnicura Strings ‘Stonemilker’ is the centre-piece. Whereas the original has such a warm electro-kick-drum pepper the crescendos, this is left raw. The chorus doesn’t build in the same way, but it scratches, itches and irritates with wonderful swells and sustained high notes.

Instead Vulnicura Strings opens with ‘Mouth Mantra’, a highly logical decision due to the big hooks and the dramatic difference in tone that results from removing the scuttling rhythms that crawl throughout the original. In fairness, without the clicks and clatters, this version feels more like a cut-up exercise, which may well be a closer representation of the writing process. There’s a lovely sense of industrialism to this version, Björk’s distinct vocal rhythm and syntax are emulated and warped by low stabs and messy high-end twirls. It’s a touch disorientating.

What Vulnicura Strings also highlights is how closely Björk aligns the string arrangements to her vocal melodies. As the album then heads into ‘Lion Song’ there really is no counterpoint plotted in; cellos play root notes and violins bend and cluster around the musical splutters.

‘Family’ steals the show here, though, for a couple of reasons. Firstly, because it takes Björk out of the song entirely. While that may seem an odd thing to credit, she’s done most other things, so why not have a song that wipes the artist from its equation. With just the string arrangements as well - and this does feel like a beefed up arrangement - it uncovers another fascinating quirk in that Björk’s drums are often the warmth and the glue in her songs. Whereas IDM beats often provide abrasion to a sound, in Vulnicura they’re the unifying peace keepers. Oppositely whereas strings are commonly considered sweeteners and embellishments, here they’re a rattling, buzzing (yet still somehow magical) series of warped tones and notes.

This album ends with ‘the hook’, a viola ‘Organista’ version of ‘Black Lake’ and, yes, it does sound like a cross between an accordion and a violin. It’s also perfectly pleasant in the fashion you can imagine a mediaeval procession would be pleasant, if a little sombre.

This reinterpretation of Vulnicura is a success that also surprises, given the simplicity of the premise. This is both a joy to listen to and a chance to focus on Björk’s string arrangements and the frustration contained therein.