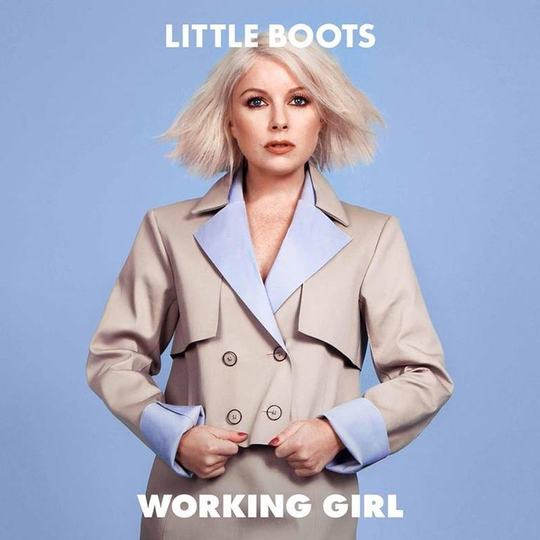 Victoria Hesketh’s metamorphosis from lead singer of indie-poppers Dead Disco to wry electro solo act Little Boots may not have changed the face of music as we know it, but it was pretty savvy: a low key bellwether for the end of indie’s Noughties dominance, and the beginning of a decade where producer-led digital pop has pretty much been the only game in the charts.

But if Hesketh was the prophet for this new world, she didn’t exactly reap its rewards. Debut album Hands and attendant hit single ‘Remedy’ certainly did a hell of a lot more business than anything put out by the band she’d been in just a year before. But it wasn’t enough to make her a household name. She parted with Atlantic, and four years later the more sophisticated, less endearingly wonky Nocturnes failed to replicate its predecessor’s success, despite going some way to anticipate the revival of Nineties house on the top 40.


Like Nocturnes, third album Working Girl is far from tuneless. But it seems to have slightly unusual priorities. It is a pop nerd’s album, worked on by a bunch of interesting producers (Ariel Rechtshaid, Chris Carmouche, Grades, Com Truise, Jeppe Laursen, Jas Shaw) and clearly within the dance-pop oeuvre. But can it really be described as ‘pop music’ in its purest terms when it’s unwilling to seriously make a play for your endorphins, and its best moments are in fact the least poppy?

The wonky playfulness of yore is long gone; there's now an underlying coldness to Little Boots’ music, and the best stuff here is when she embraces that and doesn’t try and sound like a modern pop star at all. ‘Get Things Done’ rides in on a walloping, frisky bassline and has a strangely menacing chorus refrain – “we know how to get things done” – that vaguely recollects The Pet Shop Boys at their most imperious. ‘Taste It’ has a nervy, unsettling minimalism and almost feels like it could have slid onto the last Knife album if they’d been fractionally more welcoming about things.

The record, by-the-by, comes saddled with a concept. Working Girl is named after the 1989 Melanie Griffiths film of the same name, and the lyrics deal with the work and the work life. There is a lot of stuff in the artwork referencing late Eighties/early Nineties business fashion. There is certainly something interesting about it, but it’s also a bit hard to embrace wholeheartedly. Is it meant to be a kitsch joke? A nod to an increasingly revered era of music? It sounds in principal like it should be a fun wheeze, but this is not especially fun music.

One suspects that working with six different producers doesn’t help in making a coherent concept album, but the frustration is that Hesketh rarely grabs her own record by the scruff of the neck, doesn’t have the strength of personality to really sell whatever she’s selling to the listener. With her smooth, light vocals and classy but never ostentatious tunes, she feels like a distillation of a thesis about what good, intelligent pop should be without quite being it.

Housey tracks like ‘Real Girl’ and ‘No Pressure’ don’t want for hooks or sense of contemporaneity, but Hesketh’s cold, thin vocal never delivers them with great conviction - they do sound like hits, but hits for another singer. Little Boots is closer to her element when left of centre – the icy intensity of ‘Business Pleasure’ works immaculately, but it’s not in any way a future smash.

She hits enough gold to not seem like an irrelevance, but her goals are murky – a prophet whose predictions all came true, and is now unsure what’s left for her.