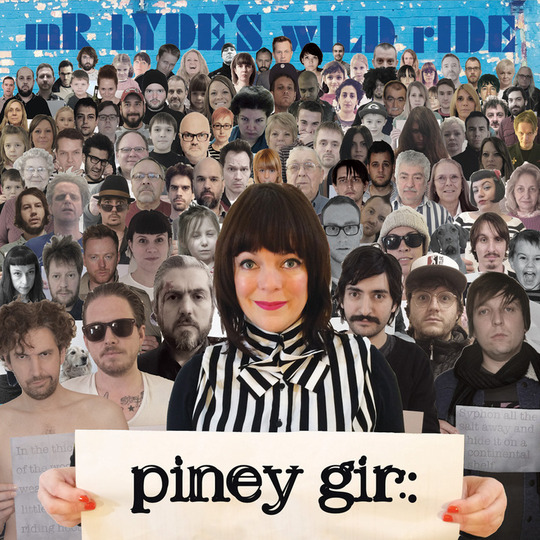 US-born, London Based Piney Gir (technically pronounced 'gear' but TOP TIP, it’s much more fun to say 'grrrr') is an artist whose work teeters on a tightrope, on the one side is the safety net of proper charm and likeability and a bag of velcro hooks unlikely to leave your brain for weeks; on the other lurks a sinkhole, a yawning chasm of self-parody, of kooky, quirky, cutesy wackiness- all of which are different ways of saying “annoying”. On mR hYdE’s WiLdE rIdE, her sixth album, Gir often risks plummeting into the twee abyss (the title, and especially tHe WaY iT’s WrItTeN is a textbook example) but thankfully, despite the odd wobble, just about maintains her balance.

What rescues Piney from her more grating Manic-Pixie-Dream-Gir indulgences (electronic squiggles, self-consciously cutesy production, the odd overly-affected vocal) is a stack of genuinely likeable songs and a knack for melodies that are never less than rock solid. Though the trappings surrounding each tune veer from the brilliantly effective (the fuzz bass that makes a beautifully hot mess of ‘Gold Rules’, the Beatle-y handclaps on ‘Wildfire Wake Up) to the genuinely irritating (the percussive breathing on ‘Universe’, the humming and scrapey violin on ‘Oh God You Devil’) the tunes they dangle from are always winners.

Gir kicks things off with a sweet blast of close harmony voices, like a deconstructed, indie take on the Beach Boys' ‘Our Prayer’; but while that song signalled Smile, an album so obsessed with perfection it drove its progenitor nuts and didn’t come out for 45 years, here we get the opposite approach: textures and layers are thrown over each other and smeared together with glee, like kids playing with acrylic paints for the sheer joy of creating. ‘Keep Together’ is a satisfyingly dense jumble of electronic jiggery-pokery and scrungey guitar, throwing on a counterpoint vocal melody that feels like ramshackle musical theatre, while ‘Mouse of a Ghost’ moves from a chiming strum-along to wonderfully fizzy lo-fi grunge that could force a smile from all but the most helpless of misers. It’s Brian Wilson’s 'pocket symphony' approach done in the pursuit of fun, rather than impeccability.

The quieter moments mostly work too, though they're more prone to Gir’s reluctance to moderate her bells and whistles. ‘Purple Heart’ has a nursery-rhyme quality to its rhythms that makes perfect sense alongside its word-association poetry, while ‘Ugly Bones’s queasy fairground waltz is a genuinely effective backdrop to its hypnotic rhyming (”There are skeletons playing clarinets with the dead set...”.) Best of all is ‘Wing and Prayer’, an enchanting, melancholic weirdo-ballad, reminiscent of Sufjan Stevens at his most playful, underpinned by some solid, chiming electric guitar.

Obviously some will find mR hYdE’s WiLdE rIdE utterly intolerable (hopefully the title exists to scare them off) and you do have some sympathy with that - Gir’s Play-Doh creativity isn’t for everyone, and if it catches you in the wrong mood can grate as much as it charms, which is a shame because under the excesses is a mischievous, likeable spirit with a hell of a way with a tune.