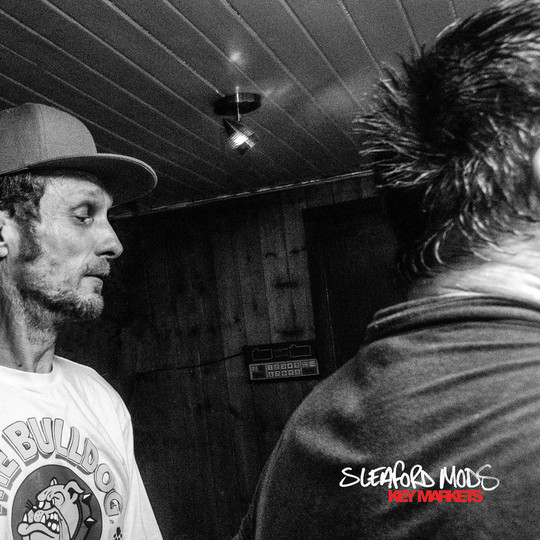 From the outside, Sleaford Mods’ meteoric rise to fame seems a bit Lovecraft-ish. Here was this belching bloke that spews curses at anyone and anything, with his silent partner nodding away at the decks to his bleak bass-crawl beats. It seemed like a shtick for bar-type crypts only, the kind where every cranny is caked in something – dust, beer, sweat, grease, noise.

When did it happen? Suddenly the malign beats had infiltrated the inkies, twisted out praise from everyone that mattered. The Modz played the same shtick, but better – slashed the fat, sharpened the knives, cleared the table. Vice lines up guest posts; European tours become a thing; labels dash off singles and comps to feed the masses.

But, see. Divide and Exit, the last LP, set up a conundrum. Now you’ve got this cult following, who want more of the same stinking shit, hipster trash talk, and general cunts. On the other hand, you’ve got folks like me removed from the whole scene: folks who stockpile curses like “you fucking tit rifle” for their personal lexicon, but have been tapping their feet for some sign of growth, or change, or any indication that the Modz can evolve beyond the raving mutation they’ve become. Because if they can’t now, then they’re doooooooomed.

On the surface, little seems to have changed. As before, Jason Williamson turns his pen against hipsters, or the “circus band / run by circus man, run by / no understanding of what it means to write these tunes” ('Cunt Make It Up') public figures like Nick Clegg on 'Face to Faces' and Ed Miliband on 'In Quiet Streets' (“the chirping cunt obviously wants the country in tatters”); and a general decline in society ('No Ones Bothered'). The usual riff raff, in other words, with subtleties that might be lost to anyone who can’t follow Williamson’s spiraling, spitting, growling rage.

Fans, of course, will reap the album’s lyrics for gold. And 'Bronx In A Six' (which, mind, I still have no idea what that title’s about) is chocked with maledictions for the clueless youth, particularly this gem -

One chain of thought that single-handedly outstrips anything Slaves tried to say with their cartoony social commentary. Ditto on 'Face to Faces' – “we have lost the sight, and in the loss of sight, we have lost our fucking minds”. Where Isaac Holman pointed his finger idly and built his argument from stereotypes, Williamson spews clever barbs that fly like sparks.

The Modz don’t sound all that different, either, though their pallet has expanded somewhat. Andrew Fearn’s beats are still bass-heavy creepers, but now vary from the moody skank of “Rupert Trousers” to the rubbery funk of 'Silly Me' (a strange and slightly irksome one, since Williamson can never groove at ease – “you fall fast in a void of pain / only to remember that you still remain”). And Williamson carves out actual melodies in some places, especially on the downtempo 'Tarantula Deadly Cargo'. 'In Quiet Streets', a bouncy cruising number, switches from all-out rant into a leery singalong (and also delivers another rich bounty of quotes – “eucalyptus? You can FUCK OFF”).

Still. If you found Sleaford Mods too thuggish or laddish for your tastes, Key Markets won’t change your mind. Songs like the chugging, irreverent 'Giddy on the Ciggies' and opener 'Live Tonight' mark business as usual from the duo, the same laser-honed beats with the same targets. Indeed, the first ten seconds of the latter – a chummy crowd chanting the band’s name – could be enough to turn off the casual listener who doesn’t relate with such rowdy chumminess. And that inclusive mean streak has been their biggest crutch all along.

Perhaps we should be thankful that Modz fandom can’t spread like a Lovecraftian nightmare, or Williamson’s own 'The Blob' (the tacked-on closer with flabby hip hop breaks). The truth would be too horrible to handle. We’d all go mad.