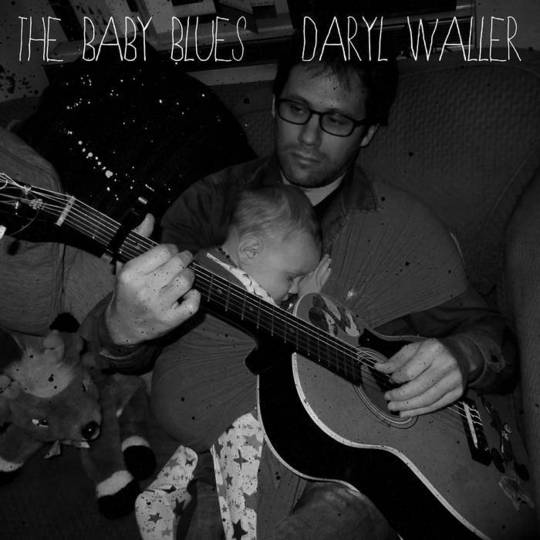 When musicians grow tired of their craft and turn to visual art, the results are rarely remarkable. On the other hand, artists who take a shot at music seem to reveal a hidden talent; almost as if they've found their ideal vocation overnight. In the case of Cornish visual artist Daryl Waller, his debut album The Baby Blues offers a whole new perspective on an already hugely diverse creative background. Best known for his weird and wonderful art projects, album covers and charming yet subversive 'interventions' (which you can take a look at here), Waller's debut album marks the culmination of six years' self-doubt and experimentation.

When Waller announced his plan to crowd fund a full-length album release, immediate thoughts were cast to what on earth it would sound like. His previous low key EPs were more like musical sketches than fully realised songs which makes the opening track 'Take Me Anywhere' all the more delightful to hear for the first time. Opening with a sinister blend of restrained acoustic chords and strings, Waller's vocals soon chime in with a hushed detachment: “Take me anywhere/ I'll go with you/ and you said/ drive the car/ fasten your seat belt/ we're gonna go real far”. Any doubt over his vocal ability is immediately brushed aside as you question why its taken him so long to put his thoughts to tape till now.

What follows is a beautifully realised collection of introverted, troubled and insightful songs which playfully blend elements of folk and spoken word to create a frequently moving musical journey. Waller's past visual work can also be found transformed to great effect, particularly on 'The Shepherd' which illustrates a brief yet poignant tale of a shepherd's efforts to find a lost sheep before being undermined by Jesus Christ.

'There Is Something' cuts to the core with a tragic yet wry confessional that few disaffected souls should have trouble relating to. Originally appearing on the soundtrack to Mark Jenkin's feature film Happy Christmas in 2011, the version present here adds a marvellously cutting spoken word section recorded by Waller at 4 AM following a 'particularly fruitless working session'.

“And so here we go/ becoming more introverted/ feeling more boring/ being cut off from others/ being ignored/ being overlooked but not looking either/ wanting attention but not being able to bring myself to seek this attention”... and so it goes on, becoming scarily relevant to any young adult who's combated feelings of self doubt, love and frustration at their own inability to chase their creative goals.

On 'Gene Wilder', Waller repeatedly requests a child to “write your name/ write your name/ write it again/ no, write it again” before moving into an initially baffling flow of verses about a lying child and Gene Wilder as the Fox in the film 'The Little Prince'. To save unravelling all of his lyrical work for you, this, like so many of the other tracks on here will only make sense with a keen and imaginative ear. For Grandaddy fans out there, the wonderfully contorted synth which sees out this track was also performed by Jason Lytle who kindly reinvented elements of the aforementioned film's score.

While The Baby Blues rarely deviates from its melancholic formula, Waller's charming melodies rouse the idea of what a British Elliot Smith may have sounded like. This is full of rich, playful and brutally open song writing; attributes any singer-songwriter worth his salt should be able to lay claim to. Fans of beautifully crafted DIY folk should put this album at the forefront of their listening and if this is the only record Daryl Waller ever makes then it's one hell of an accomplishment to leave behind.