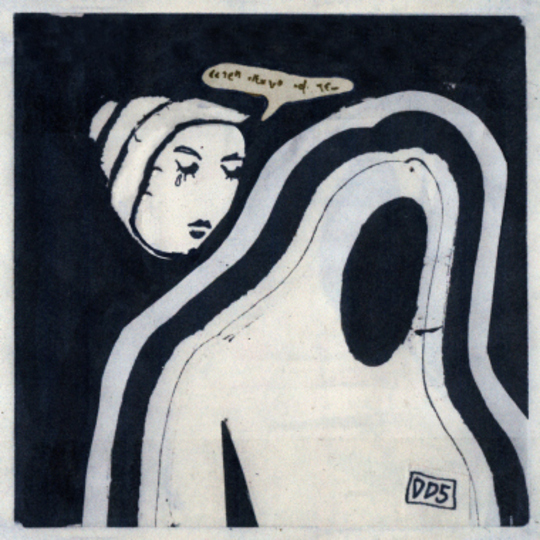 I don’t think I’d be familiar with the work of 24-year-old Airick Woodhead if I hadn’t taken the bold move of arriving at a gig early to catch the support act. It was sometime last year in Liverpool’s sublime Kazimier, and that moody Canadian pair Purity Ring were due on stage in about 40 minutes. We waited around the front of the room, idly curious at the miniature fortress of synths and samplers that stood poised for action. He walked on - polite applause - and with an insouciant slink over to his musical gyroscope he proceeded to fire out the maddest configuration of luminous sounds that I’d heard in ages. He was like Jackson Pollock armed with a paintball cannon, this rapid spin-cycle melee that hit your chest cavity and exploded on impact. It was half an hour of perpetual motion; seriously robust vibes. Then when it was over he slinked back into the darkness and made way for the main event, who sounded quaint and overly tasteful by comparison.

So that’s Doldrums. And if you slept on 2012’s Lesser Evil, then get yourself familiarised ASAP. It translates the live experience in ultra high-definition, and achieved moderate buzz after critical hype from Pitchfork et al. Since then, Woodhead has signed up to Sub Pop, and now releases his second album The Air Conditioned Nightmare, a title borrowed from Henry Miller’s 1945 book of essays. In the title piece, Miller returns home to NYC and sees nothing but a rotten core at the centre of The Big Apple. He’s not best pleased, and launches a misanthropic tirade against yesterday’s modernity.


For Woodhead, any nightmare is surely caused by the rapid flickering of his own febrile imagination than any dehumidified office booth. This album is as restless and rambunctious as they come. The first song doesn’t sound like an intro and the last song doesn’t really wrap anything up. Doldrums chooses chaos over coherence every time, and the record plays out like he’s tipped a bag of samples into a blender, thrown away the lid, and cranked the dial to the highest power setting. It splatters from your speakers, and you get the impression that Woodhead probably threw the finished CD out of his window like a frisbee in order get on with making a whole bunch of new tracks.

At its best, the album combines fricative lisps of percussion with inky pools of noise and massages them into softly pulsating grooves and channels. In places, tracks like ‘We Awake’ and ‘Blow Away’ are reminiscent of the organic microhouse textures of Matthew Dear or the nocturnal dream-state induced by Jon Hopkins’ Immunity. He works best when he draws from a palette of sounds that feel more human and anatomical; warm clicks, purrs and stretches that flit underneath his voice. Lyrically it’s indistinct, but Woodhead's gliding androgynous vowels add a drifting butterfly quality to the songs, as demonstrated on the undulating curves of highlight ‘Video Hostage.’

Elsewhere the album feels less successful when it relies on nailbomb subtlety that pricks the ears but fails to ignite the same response in the feet or the heart. Opener ‘Hotfoot’ sounds like some metallurgic version of The Knife, with clanking anvil-heavy beats and shuddering waves of distortion. Meanwhile ‘Loops’ is an 8-bit blitzkrieg that sounds like it’s been wheeled out from the wreckage of the MySpace era. Doldrums make an enormous splash with their sound, but sometimes as a listener you long for the drive of forwards momentum. On Lesser Evil this didn’t matter so much, as the songwriting was bold enough to shoulder the hyper-activity. However, on The Air Conditioned Nightmare some of the songs feel reverse-engineered, with vocals serving to glue the songs together rather than providing a focal point in themselves.

The Air Conditioned Nightmare then, is an album that’s well worth a dive into. It contains ideas squared and cubed into infinity, and has passages showing more creativity than a hundred lads with polished shoes and guitars could muster in a hundred months. It might not be grazing your end of year top ten, but there’s still plenty of goodness to feast upon.