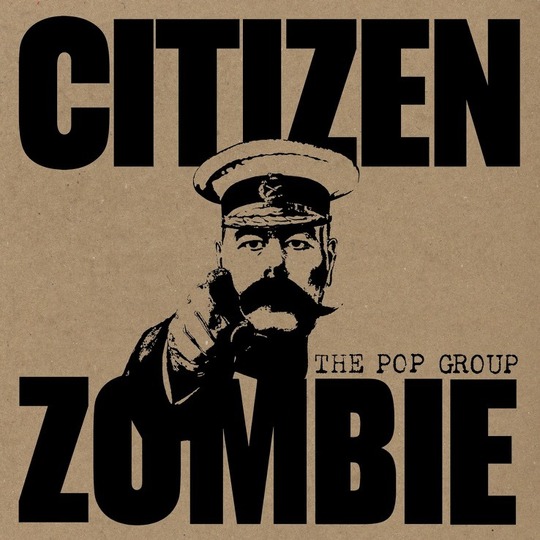 Fittingly, The Pop Group’s return to recording after over three decades opens with a strangled scream. In their post-punk pomp, when contemporaries like Public Image Ltd and This Heat respectively clawed away at the skin and drilled away at the foundations of the popular song, Pop Group lead singer Mark Stewart seemed intent on the screaming the life out of it. Songs survived the barrage, reconstructed and reinvigorated rather than deconstructed and destroyed by those interventions.

That scream on ‘Citizen Zombie’ (the opening track that shares a terrible title with its parent album) bleeds into a monolithic mix of synth, thick overdriven bass, scorched vocal chords and thudding rhythm. It sets the tone for a record that tears past at a blissful pace. As they have since returning to the stage, the band sound both delighted and energised.

The mood continues on ‘Mad Truth’ where shimmering synth pulses top giddy guitar duels over a bass line aimed squarely at the dancefloor. Similarly bouncy is ‘S.O.P.H.I.A.’, built around a fulsomely funky bass figure that breaks only for breath and a dose of paranoia from Stewart: a chorus of “Assume nothing/Deny everything” on repeat. Later ‘Box 9’ is distinguished by the squelch of its keyboard patterns and pointed pluck of bass guitar strings.

With its aggressively spoken words (a veritable state of the nation address) ‘Nations’ recalls the band’s earlier Amnesty Reports. Unlike the decomposing sound of those tracks, here the band deliver a krautrock offering that could masquerade as an offcut from Neu! 2. Meanwhile, ‘Age of Miracles’ sounds like The Pop Group remixed by Dan Snaith. It’s a joyous blend of housey bass and drum thud, syncopated guitars, sun bleached piano breaks and upbeat, if still fractious, vocals.

All of which is to say that Citizen Zombie is a lot of fun, which is both a blessing and a curse. Selecting the band’s 1979 single ‘We Are All Prostitutes’ as his favourite for Channel 4’s fin de siècle survey of musical influences back in 1999, dark lord of the dance Nick Cave observed that when his band, The Birthday Party, circumnavigated the globe to arrive on these shores in 1980, The Pop Group were the one band in the congealing post punk scene to truly impress. They made, he said, 'violent, paranoid music for a violent, paranoid time'.

Almost as much time has now passed since Cave’s selected that song as had since the band’s initial demise back when he made it; even more has changed. Back at the turn of the century The Pop Group’s mythic status was buoyed by the near impossibility of accessing their music. It was a dark myth, fed on brutal song titles and the angry aesthetic of once-glimpsed record sleeves. Since then reissues and reformation on the live circuit have opened their legacy to another generation or two, while YouTube has not only made their music instantly accessible worldwide, it has opened the archive of every word ever uttered about them: you can listen to exactly what Cave had to say in 1999 right this second if that is your want. In parallel, the post-punk revival of the last decade saw band like Out Hud and !!! draw as heavily on the Pop Group’s sound as any.

But we still live in violent, paranoid times, and this time round The Pop Group don’t quite reflect that. They are a band that has come into the light. That Citizen Zombie could happily have slid out to general approval under a DFA banner a decade ago is no mean achievement and this is a genuinely welcome return. It just seems unlikely that anyone will be selecting a track from this record as their favourite 20 years from now.