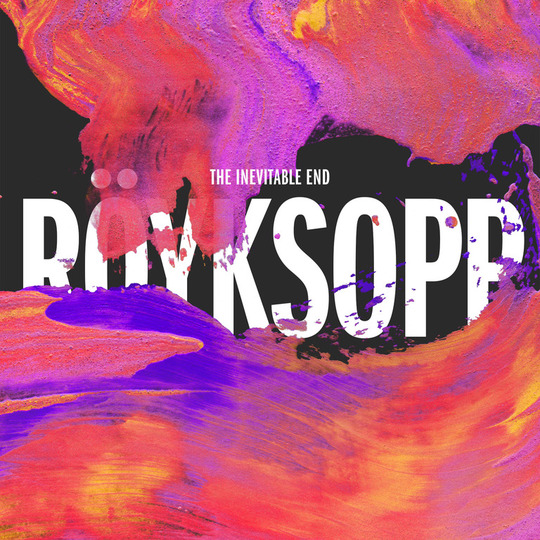 "All that we were, all that we knew, fading away" woes the closing refrain on ‘Sordid Affair’, and it’s easy to see the line as standing for Röyksopp themselves. Thirteen years and five albums in and the Norwegian duo are backing away from 'the traditional album format' - they’re still planning to make music, they say, but it won’t be like this.

Not that we should let the matter of their demise overshadow the music, of course. Nope. Just try to put that to one side. Granted, that might be pretty tough given the melodrama of the album’s title and a cover that depicts Röyksopp’s logo effectively drowning in neon paint, but keep going - past the song titles such as ‘Skulls’ and ‘Monument’ and ‘You Know I Have To Go’, the persistent lyrical themes of nostalgia and decay and the 30 seconds of silence that we’re given at the end for quiet, mournful contemplation of everything we’re losing, or something.

Alright, fine - putting that to one side isn’t going to work: The Inevitable End is pretty much a long goodbye throughout, a death rattle comprised of squelching bass and emotive synths in place of waving interminably from the doorstep. But hey, indulgence isn’t necessarily a bad thing, and as suicide notes go this is a damn sight catchier than most, from the vocodered stomp of the album’s opening through to the wobbling, twitching bassline than sees it out.

And Svein Berge and Torbjørn Brundtland have gathered a fair few friends around the Dignitas gurney to help sing them out, from fellow Norwegian songwriter Susanne Sundfør to The Irrepressibles’ Jamie McDermott and Man Without Country’s Ryan James. Robyn’s here, of course, reprising 'Monument' from their collaborative mini-album Do It Again and having a lot more fun this time around, the epic reach of the original shunned for less reverb and a lot more dancing. Her second appearance is less successful, alas, an overwrought misstep of rising strings and solemn vocals metronomically chanting "what the fuck is wrong with you?" for way too long for it to be funny and without the substance for it to be anything else.

The others do better: James’ turn on ‘Sordid Affair’ is understated but effective, whilst McDermott’s aching melodrama fits well with Röyksopp’s own twitching, restless melancholia, particularly on the midpoint highlight 'I Had This Thing' with its diving sub-bass and rousing crescendo. Best up though is 'Running to the Sea', a slow-build of gathering synths and bracing vocals that manages to transcend some ill-advised rhyming with its bruising breakdowns.

In truth there’s nothing here that, in isolation, is weak - there’s little that progresses Röyksopp’s sound, granted, but as a summing up ahead of a big full stop The Inevitable End demonstrates their strengths pretty damn well. Yet as an album it’s not much fun: there’s a bleakness seeping from every note, and of that wide-eyed, bouncing twinkle, that 'Eple' wonder with which the duo announced themselves back in 2001 there’s very little hint. "I don’t remember any more what I used to be/ Where is the quiet piece of home where I could breathe" pines ‘I Had This Thing’, "An echo of how you knew me/An echo of what I used to be" mourns ‘Monument’: by the time ‘Here She Comes Again’ asks "Do you want to know what’s killing her inside" this seems less a warehouse rave than a late-night call to the Samaritans.

Sure, Röyksopp have always married darkness to their beats, but here, across more than an hour, it’s too unremitting to welcome repeat listening - like Requiem For A Dream, 21 Grams or the opening to Up! The Inevitable End is easy to appreciate but not something I really, if I'm honest, want to go through again. So hey, if this is to be their grand bowing out I’ll stand, I’ll clap and cheer but then I'm leaving, 'cause that after-party’s gonna suck.