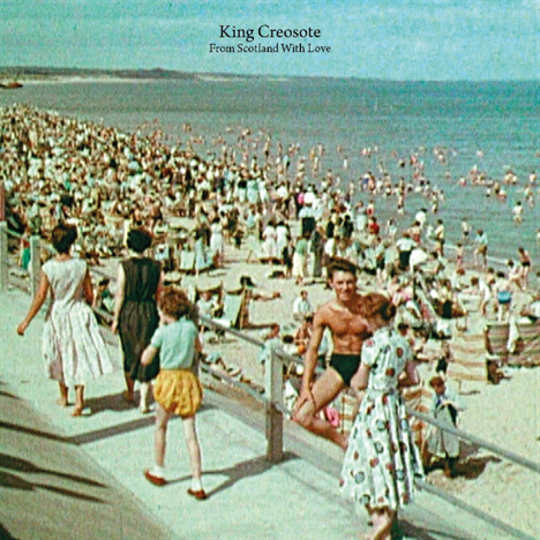 Kenny Anderson's latest long player has the unenviable task of following 2011's masterpiece, Diamond Mine. This is unfair. Not least because the latter album drew from over 20 years worth of King Creosote material, but also because it enlisted the help of knob twiddler par excellence, John Hopkins. So it was with bated breath yet with diluted expectations that I approached From Scotland with Love. If there is such a thing as a difficult 42nd album - this was bound to be it.

Where does a songwriter go for inspiration after over two decades of ceaseless productivity? The answer in this case is the history of his homeland. From Scotland with Love was made as the soundtrack to a poetic film of the same name which consists entirely of archival footage from Scotland's past. The film features no narration or interviews, allowing for Anderson's songs to inform the sepia montage of grubby dock workers, miners and canny youths out on the lash.

King Creosote's music has always conjured visions of a remote Scottish life. From the “sorry it's so wee” shopkeeper whose dialogue opened Diamond Mine to the accordion in 'My Favourite Girl', there is something ineffably Scottish about what Anderson does. On From Scotland with Love, he is able to inhabit the lives of others, and give voice to the Scotsmen of the past rather than simply voice the outpourings of his soul. It's a device which suits his craft well. “I'm clinging on to my home life, and my fingers clawing at peat and sand”, he sings in 'Leaf Peace'. This is not a metaphor. Instead it is a literal description of the footage of agricultural workers pitted against their own barren landscape. Alongside these tales of individual hardship and family life are the grander themes of war, emigration and political unrest. 'Pauper's Dough' becomes a Socialist hymn when set against the political demonstrations, bomb raids which the film depicts. Its refrain of “you've got to rise out of the gutter you are inside” is more a call for social change than a judgement on anyone's mental state. Likewise, its multi voiced chorus is less an affected piece of kitsch, and more the sound of a nation's resolve.

There are enough moments of tenderness and humour, however, to prevent this being all too serious. King Creosote has always had just enough oddness to preclude being tediously po-faced: and this album is no exception. For every hushed ballad and mournful croak of Anderson's larynx there is an equal and opposite positive force. 'Bluebell, Cockleshell 123' epitomises this bittersweet approach. It's a song about dying whose chorus is sung by a choir of schoolgirls in a nursery rhyme fashion. Anderson finds romance in the most banal places, the fishermen in 'Cargill', for example, are given some of his best lines: “my heartstrings entangled in your net”, and he seems to find inspiration in documenting the smallest moments of everyday life and making them magical. “The small change” which is hidden throughout the week in 'For One Night Only' is brandished about at the weekend, allowing for a couple to escape their day to day drudgery in “predictable” drunkenness.

Although the subject matter is small the music itself is widescreen; with lush production and a string section section featuring in many songs. This lends the music a textured aspect befitting its cinematic purpose, and marks a continuation of King Creosote's journey from dishevelled lo-fi troubadour towards a more polished entity.

For many artists this trajectory would be lamentable, yet it's good to hear Anderson's tracks given room to breathe. Some of the arrangements here are almost baroque, such as the majestic 'One Floor Down', one of many tracks on the album to recall Sufjan Stevens, another would be solipsistic songwriter who tackled grander themes in his music.

This project that plays perfectly to his strengths. Never has a life spent on the breadline in Scotland seemed so romantic. The heartbreak and toil inherent in Scottish history have been rendered beautifully by someone who obviously has a strong attachment to the country. This wouldn't work without a Scotsman at the helm. From Scotland with Love stands testimony to the increasing genius of Anderson and his craft.