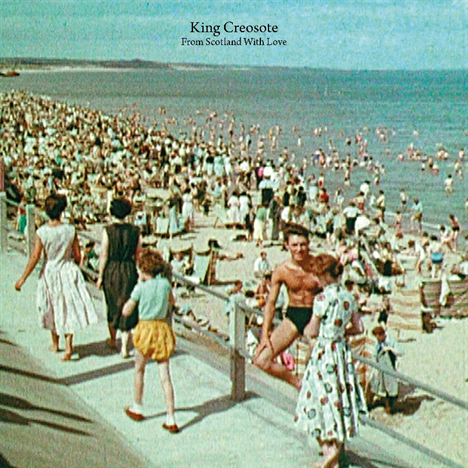 King Creosote - From Scotland with Love

A continuation of King Creosote's journey from dishevelled lo-fi troubadour towards a more polished entity.»

Composed of eleven stunning and emotive tracks, 'From Scotland With Love' was written by King Creosote and produced by music supervisor and guitarist David McAulay, with additional production by Paul Savage, in Chem19 Studios in Glasgow. The record features King Creosote accompanied by his band - Derek O'Neill (keyboards), Andy Robinson (drums), Pete Mcleod (bass), and Kevin Brolly (clarinet) - as well as an additional string section (arranged by cellist Pete Harvey), and a choir of backing vocalists. 'From Scotland With Love' was created in collaboration with director Virginia Heath and Producer Grant Keir as an audio-accompaniment to a poetic documentary film of the same name, to be released for the Commonwealth Games this summer. Featuring archive footage but no narration or interview, the film works around themes of love and loss, war, resistance, emigration, work and play, and is driven as much by the music as it is the images. For the first time King Creosote found himself being able to write from other people's perspectives, such as the female characters found in the archive (the 'fisher lassies' inspired the moving track Cargill, for example). The result is 'From Scotland With Love', one of King Creosote's most widescreen cinematic and finest pieces of work to date.
description from www.roughtrade.com