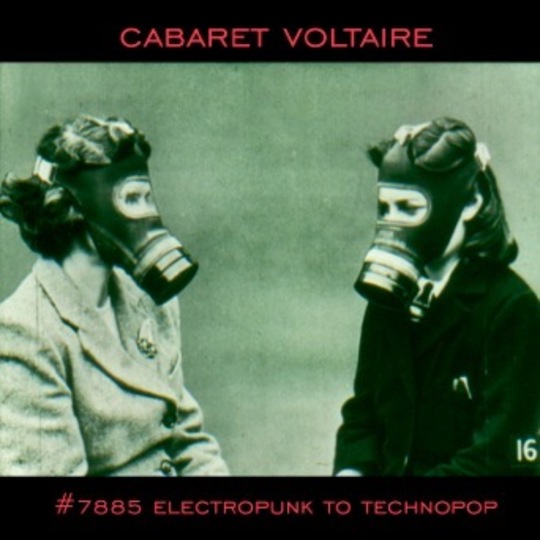 I have to confess that I’ve never properly got into Cabaret Voltaire. Despite being one of the most important, and influential, groups to emerge from the burgeoning world of industrial music in the late Seventies, the Sheffield act are better known for a shift in direction, in the mid-1980s, towards the more fashionable world of new wave. #7885 (Electropunk to Technopop, 1978-1985) is, one suspects, designed to emphasise the group’s shift in style over the years. Following Chris Watson’s departure, in 1981, Richard H. Kirk and Stephen Mallinder oversaw the gradual mutation of Cabaret Voltaire from industrial noiseniks to synthpop soothsayers, and this compilation adeptly illustrates the nature of that transition.

The contrast between the opening duo of songs - ‘Do the Mussolini’ and ‘The Set Up’ - and their counterparts at the record’s conclusion - a 7-inch version of ‘I Want You’ and ‘Warm’ - represents something of a distillation of Cabaret Voltaire’s transformation over the seven years covered by #7885. The shift from the dystopian, distorted, downright weirdness of the late Seventies material to the funkier, more structured output that dominates this collection’s second half isn’t as dramatic as one might think. Sure, ‘I Want You’ comes with Eighties cop show bass and ‘Warm’ comes with equally timestamped synth melodies, but the use of beats and the texture of the electronics evolves steadily and coherently over the course of these 19 songs.

If #7885 demonstrates Cabaret Voltaire’s electropunk origins in grit and discontent, then, it also perfectly portrays the swift, unforgiving slide all forms of late Seventies punk took into more commercial terrain. Many late Seventies guitar toters found in the greater mainstream opportunities afforded by new wave not only an unexpected penchant for standardised melodic constructions, but also a wider audience for - admittedly mostly ineffective - social critique. Cabaret Voltaire’s later material emphasises that this could be done without sacrificing all credibility, but it doesn’t feel quite right that a band as vital as this embraced pop trends as readily as they did.

Fundamentally, the vast majority of #7885 is made up of inventive and provocative material. Even when the move to technopop has become clearly apparent, circa ‘Just Fascination’, there is still more than enough depth to the band’s approach. This rather complicates the Cabaret Voltaire narrative, in that whilst it’s obvious that Watson’s departure was a turning point, the band timeline provided by this release implies that to divide the band’s output based around Watson’s exit would be to oversimplify the narrative. There’s little denying that early tracks like ‘Nag Nag Nag’ and ‘Kneel to the Boss’ are more potent musical statements than ‘James Brown’ or ‘Kino’ but, to their eternal credit, Kirk and Mallinder retained enough of an interest in sonic experimentation to render later material considerably more listenable than that of most of their synthpop contemporaries.

Unfortunately, however, no matter how listenable the latter half of this compilation is, it’s hard not to feel that it’s a shame Cabaret Voltaire abandoned their early abrasiveness as quickly as they did. They may have emerged from the shadow of industrial music as an impressive pop act, but the aforementioned contrast between the first and last two tracks on #7885 ultimately serves as a reminder that, no matter how hard you try, a band’s pop phase is rarely as exciting as their more esoteric output.