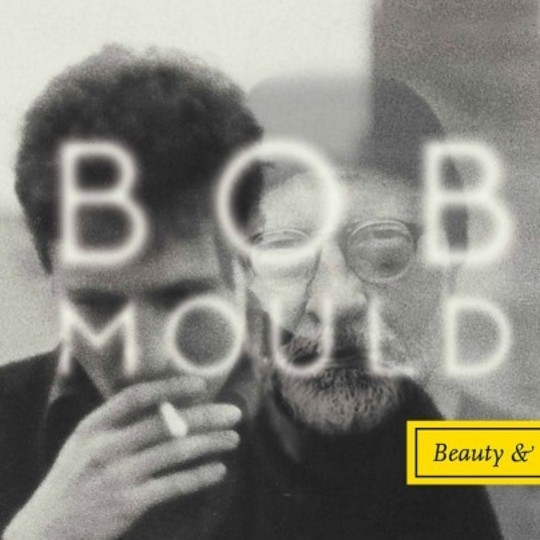 Good ol’ Bob Mould has lived through a fair handful of public lives over the years. The furious but tuneful firebrand leader of Hüsker Dü in the Eighties ; the acoustic songsmith of Workbook; the re-invented power-pop hero of Sugar in the Nineties; an experimental dance DJ and remixer during the mid-Noughties; successful autobiographical author; hell, he even palled around with Kevin Nash while writing for WCW wrestling back in the day.

It seems, after 2012’s powerhouse album Silver Age, Mould has decided this is as good a time as any to take stock of this three decade journey, dissect the past, give an account of the present and project into the future. Despite the songs here depicting a very specific 12-month-period of his life, this feels like a genuine retrospective.

Holding together his phenomenal touring band featuring the inimitable Jon Wurster (Superchunk, Mountain Goats) behind the kit and Jason Narducy (Split Single) on bass, Beauty & Ruin is a record that splits very clearly into four parts – as Mould himself would have it “Loss, reflection, acceptance and future”. We’re first met by a miasmic trio of awkward, downbeat tunes most reminiscent of Sugar’s overlooked 1993 mini-album Beaster. While Mould’s crystalline self-production typifies Beauty & Ruin, this opening triptych is denser, heavier than what follows.

While ‘Low Season’ with its humming organs, clashing metallic samples and Mould’s torn vocal offering lines like “…drink the pain away / the chances that I wasted in my unforgiving days”, is something of a dirge, a bird allowing its bill into the sludge, Wurster’s snare pecking at Mould’s harsh chords, layers of sound building to a sharp climax, and ‘Little Glass Pill’ fires off like a fucked rocket, a rollercoaster of rage careering through the maelstrom, it’s new single ‘I Don’t Know You Any More’ that impresses most in the blackest section of the album. It’s an irresistible first glimpse of Mould’s stranglehold on the power-pop genre – a glistening, sunlit creature, Mould’s voice a full-throated childhood holler, the chorus’ arms open wide despite the weight of sadness in its lyrical content (“Pushing record when I wanted to play / The message is clear, how you pushed me away”) and its strangely abrasive presentation. As a musical cousin to ‘If I Can’t Change Your Mind’ it bodes well for the remainder of the record.

The second segment holds the Hüsker Dü storm of ‘Kid with Crooked Face’, torrents of furious Fender Strat burying Mould’s choking voice, as well as ‘Nemeses are Laughing’ – a unique doo-wop intro branching into jerky major/ minor shifts and, as one would expect, reflective lyrics: “Retracing footsteps of my younger days” and observing sadly that “Hummingbirds are always hours away from death”. Perhaps the best song of this entire collection, maybe Mould’s most impressive, affecting song in years, is ‘The War’ – a hands-in-the-air riff carrying aloft a tear-in-the-eye vocal (“Listen to my voice / it’s the only weapon I kept from the war”… “Everything we made, reduced to dust”); it’s utterly triumphal while at the same time capturing Mould’s defiance in the face of the pain of the past – a sentiment he clearly lives by and passes on, just a man and a guitar at the song’s close, whispering “Don’t give up and don’t give in”. It’s majestic.

In the third quarter, ‘Hey Mr. Grey’ is the standout – a furious, self-accusatory SST blast tempered with a Byrds-like melody, spiked with a Replacements nod (“Kids don’t follow” he cries) and a killer solo. ‘Forgiveness’ offers a Ted Leo-like jangle-popper tackling a tangled relationship, Mould once more working out the intricacies of heartache, using his audience as a proxy and advising, touchingly “Plants on the back porch, water them tonight / Make sure to keep them in the sunlight / If you neglect them they will never grow / Sometimes plants don’t come back – and you won’t know” – a lyric as clumsy as it is genuine. The heart-filling descending chord sequence of ‘Fire in the City’ is also a minor delight.

Moving in to the home straight there’s the speeding thunder-strike of ‘Tomorrow Morning’ (“I remember almost everything / Watch me walk as I forget”) the ragged surge of closer ‘Fix It’ with its almost silly, almost awesome chorus and bald statements like “I don’t know how anyone survives” and the late in the day standout ballad ‘Let the Beauty Be’. It’s a lovely bit of acoustic wooliness indebted to Mould’s Sixties inspirations that dodges simplistic formal cliché by asking questions like “Have you ever really wanted to die? / Can you carry all the pain of your life?”

Regarding the latter, Mould can clearly do just that – and express it with power, skill, gut-tugging emotion and clarity. That he has half a lifetime of experience behind him, his array of tools honed and perfected over the years, has allowed him to hit a peak with Beauty & Ruin. It really is one of the best things he’s ever put his name to. I’m not sure how writing for the wrestling has helped here mind you, but I’m sure it has. Nice one, Bob.