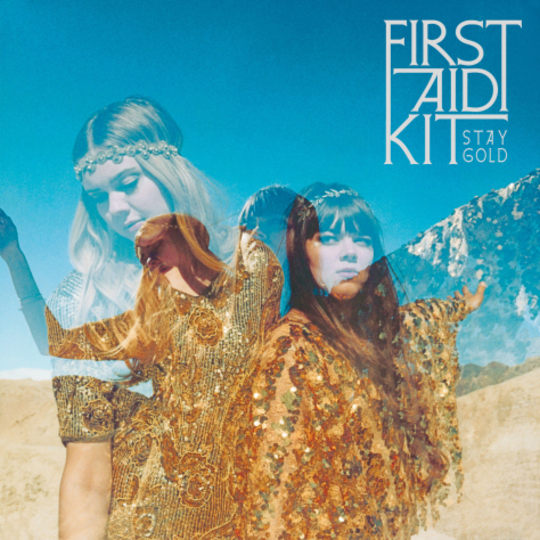 If ever there was a band that combined the older, established music business with the outlaw frontier that is the internet age, it’s First Aid Kit. First coming to global prominence thanks to a cover of a Fleet Foxes song uploaded to YouTube when they were still teenagers, the precocious Söderberg sisters had already received attention in their native Sweden thanks to songs uploaded to their MySpace page. Their key influences – a mix of the classic alt-country singers and their modern angst-ridden counterparts such as Conor Oberst – are those of a generation who have everything at their fingertips, who can flip through albums online, hear the sounds of another part of the world from their bedrooms and collate impressive record collections at the snap of a finger.

However, First Aid Kit have also gone down the traditional route to success – their name has travelled via word of mouth, first via esteemed patrons such as Robin Pecknold and Oberst, and then through the audiences of these artists, down to those strange people who still go out and buy physical copies of records, which means they can celebrate the launch of their third album with a date at the Royal Albert Hall.

That’s down to one thing really – those voices. When Johanna and Klara harmonise, it doesn’t matter how old they are, or that they’re from suburban Stockholm rather than downtown Nashville. Throughout time people have gone weak at the knees for beautiful harmonies, and First Aid Kit can deliver them impeccably.

For Stay Gold, the formula that worked so well on 2012’s The Lion Roar is tinkered with slightly, but the basics remain intact. It’s all still based around those voices, with producer Mike Mogis pushing them to the forefront throughout. ‘Cedar Lane’ might build to a climax with swells of lush strings and pedal steel, but they’re a mere background swell next to those soaring vocals that carry everything along. Gentle flutes bring ‘The Bell’ to life, steering the sisters slightly away from their dusty American heartland and towards a lusher, more Celtic folk strand, as if some Van Morrison has been introduced to the playlist alongside Gram and Emmylou, but at heart it's a fireside ballad, sung with gusto.

One of the first things that hits you about First Aid Kit is how such youthful voices are concerned with weighty, aged matters, and lyrically Stay Gold remains on that path. ‘Waitress Song’ is almost a female counterweight to Fleet Foxes’ ‘Helplessness Blues’ with its desire to escape the modern world in favour of a simple idyllic life. The trio of tracks that open the record, including the currently omnipresent ‘My Silver Lining’, read like the weary sigh of a musical veteran on the page. “I don’t know if I’m scared of dying but I’m scared of living…/Regret, remorse, hold on, oh no I’ve got to go…” Johanna reflects, an old soul in a twenty-something body. The following ‘Master Pretender ‘and ‘Stay Gold’, indeed the rest of the album, follow a similar wizened path.

Such concerns might lead to accusations about authenticity on the part of the photogenic Söderbergs, as if they’re playing at this heartbreak lark after hearing a couple of Neil Young albums. Are they simply a Swedish version of Mumford & Sons, some nice pop songs roughed up with pedal steel and a dustbowl makeover?

I wouldn’t say so – and even if they are, who are we to say whether that’s more ‘authentic’ than anything else? The old and the ugly don’t have a monopoly on heartbreak, and the patronage of Oberst, Pecknold and Jack White suggests that they’re pretty convinced about First Aid Kit’s talents.

What you definitely can accuse them of, though, is a lack of variety. Hear any of these songs in isolation – and I guarantee they’ll be all over a radio near you soon – and they sound fantastic, attention-grabbing and powerful. Heard one after the other, they do tend to blend into a mass of nice-singing-about-heartbreak-sameness.

It might be churlish to suggest that First Aid Kit introduce some rougher edges or explore some other musical avenues, when they’ve nailed what they do so exquisitely. However, over time they’ll have to if they're serious about taking the roads their heroes have travelled.