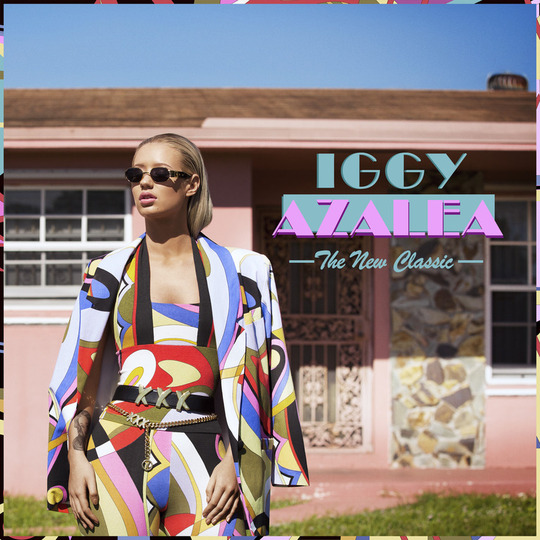 If the decision to slavishly homage iconic 1995 teen comedy Clueless to stage the video for her single 'Fancy' is any indication, Iggy Azalea has her own retromaniac idea of what constitutes 'classic'. Watching her rap "First things first I'm the realest" in Cher Horowitz's clothes was just priceless. In 'Pu$$y' off her first, tentative mixtape Ignorant Art, she sampled the bit where Grace Jones lambasts Eddie Murphy in 1992 film Boomerang. In 'The Last Song' she went on to rap "True love died in '96/There is nothing left now", referring to hip-hop culture after Tupac. The Nineties recur. It only made sense, then, that to write the ear-catching hook for 'Fancy', Iggy recruited the always brilliant Charli XCX, another self-proclaimed Nineties nostalgic and ambassador, with Grimes and many other young artists, of the 'I don't care' policy when it comes to the alternative/mainstream pop divide.

But it's the conversation about 'pop and hip-hop' which sets the scene for Azalea. She went from underground mixtapes filled with in-your-face lines and pealing beats to signing with TI's Grand Hustle and scoring a couple of top 20 singles. She even toured with Nas and Beyoncé. The New Classic chronicles her ascent to stardom, from the "No money, no family/16 in the middle of Miami" phase she recalls in her first single proper 'Work' (here placed halfway through the album) to the "bow down to the goddess" bragging of the surprisingly rocky 'Goddess'. If you think the narrative doesn't sound new, you are excused. It doesn't. With her imaginative pop cultural references and all the genre and subcultural boundaries she's been crossing, you would expect this album to burst, experiment, scar and express all sorts of mixed feelings about this 'being the realest Nineties nostalgic in 2014' role she's carved for herself. Despite variety being the explicit goal, The New Classic's ultra-polished production ends up overshadowing and sanitising Iggy's persona and quirks.

For one thing, it is chock-full of summer hits, but while on 'Fancy' the trade off between the scraggy electro beat and Iggy's trademark nasal flow make for an infectious, bouncy club song with an interesting penchant for awkwardness, the Katy Perry-co-written, Rita Ora-featuring 'Black Widow' is so preoccupied with its overfilled, catchall crescendo that it oozes away before you even notice. In 'Impossible is Nothing' Iggy tries to empower and motivate newcomers: she sounds honest when she raps “I even hope at one point you take it farther than me”, but despite the eerie bell loops and the electric guitar line lurking in the background, her recommendations get lost in forgettable singalongs. Timbaland teams up with omnipresent producers The Invisible Men on the poolside hymn 'New Bitch': Iggy tries hard to take a post-feminist stand in the lyrics (“'Damn, she's too thick, who is this?' I'm his new bitch”), Mad Men reference and all, but its spiraling Euro-trance chorus makes it sounds more sappy and docile than it would and probably should be.

It's a shame The New Classic can sound so heavily manufactured, if anything because interesting things happen from time to time. In the vinyl-effected 'Don't Need Y'all', Iggy has finds all the space she needs to vent about the downsides of fame. 'Goddess' transitions from a breathy bass-led intro to a rock blast, with her sassy flow and a creepy steel pan loop tying everything together. It was clearly written to appease Yeezus devotees, or piss them off, I haven't figured it out yet. The closing, horn-tooting 'Fuck Love', eased in by the restless 'Lady Patra' (featuring Lil' Kim-approved dancehall giant Mavado) is Iggy at her most unrepentant (and fun). In less than three minutes, squabbling over a clear-cut, Pharell-reminiscing uptempo beat, she makes a contribution to the popcultural her-story of 'self-empowerment via materialism' that'll make Azealia Banks cringe inside her studio: “Fuck love gimme diamonds, I'm already in love with myself”. Again, this is hardly news, but when Iggy's free to do it, she can effortlessly take 'classic' tropes and make them her own.