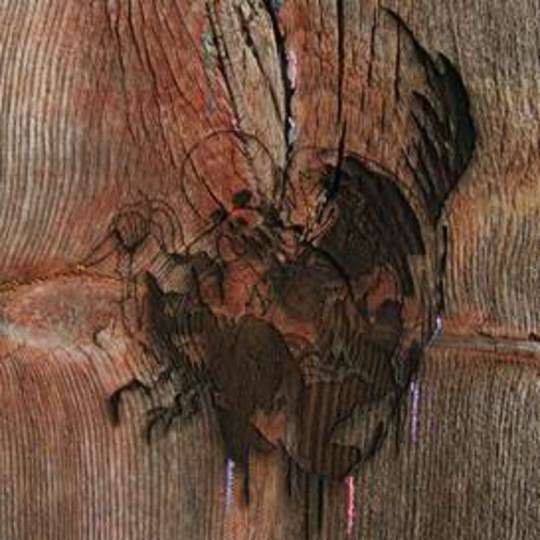 A lot of Animal Collective records are failures. That is, failures in terms of translating the band’s initial intentions to the finished recordings. Centipede Hz was supposed to be a return to live arrangements, but Avey Tare has admitted that wasn’t what that record ended up being. And Strawberry Jam was inspired by the processed gloop in those little sachets of jam you get on planes. I leave it to you to decide if that’s what you hear when you spin that album.

We hear a similar disconnect between inspiration and execution with Enter The Slasher House – a record which Dave Portner has said was intended to be a modern take on goofy, horror-pop songs like ‘Monster Mash’. By and large, he misses the mark on that front again, but that should have been fine. When Animal Collective records wander from their initial inspiration, they’ve generally kicked up storms of new ideas as they gallop into fresh territory. But this project finds Portner occupying familiar space, still on the slight plateau he’s hit since the landmark Merriweather Post Pavilion.

The song which achieves the greatest level of success – in both following through on intention, as well as delivering greatest satisfaction to the listener – is lead single ‘Little Fang’. Slinking on the jingle jangle of live guitar, and easy going hooks, it’s a genuinely new potion of sounds for Portner, as well as offering the sort of atmospherics you assume he had in mind when he talks about the inspirations behind the record.

But mostly the Slasher Flicks feel like a vehicle for more Avey Tare solo material. To be fair the clue's in the title, so it feels a little unfair to criticise the band on the grounds of sounding too much like their front person. Still, it’s difficult not to wish that this record sounded more like a genuine collaboration between its diverse and high achieving personnel. The back flipping vocal of Dirty Projecters’ Angel Deradoorian is woefully underused – the snippets of her melodies teasing the prospect of being a brilliant foil to Portner’s anxiety-shredded splatter, but it’s used frustratingly sparingly.

Jeremy Hyman’s drumming goes a step further. Sure, he contributes some of the clearest examples of sounds which are unmistakably not Animal Collective, like the woozy groove of ‘Roses On The Window’. But these fresh, external influences neither make the sound more varied, nor rein in Portner’s idiosyncrasies. Instead, they make Portner sound even more like Avey Tare. When presented with the frantic, galloping pound of something like ‘Blind Babe’ - an unmistakably Ponytail-infused flurry of rhythm - Portner battles against it upstream by getting even wordier than usual. The result is still a fun rush through Portner’s charms, but it feels like a missed opportunity on fulfilling the trio’s potential dynamic.

No matter the outcome, Animal Collective-related projects are rarely uninteresting. And even though it covers ground Portner has already explored, Enter The Slasher House is no exception. Nonetheless, there’s no getting away from the fact that there’s stagnation here. For all his talk of trying to create something more uplifting than Down There, Enter The Slasher House sounds like a direct sequel to his swampy solo album, and wrongly marginalises the influences of his collaborators. Considering the inspirations behind the project, and the people involved, this band had the potential to force Portner through another exciting phase of reinvention. Instead, Avey Tare’s Slasher Flicks finds Portner sounding more like himself than ever.