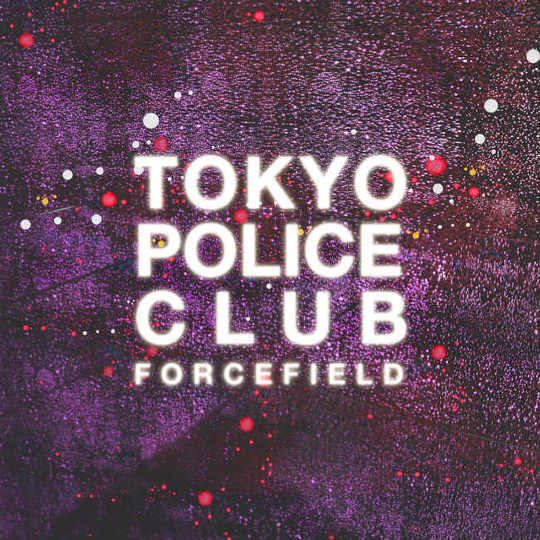 The basic idea of a force field is one of protection. A barrier, a wall, a shield. In the case of plucky Canadians Tokyo Police Club, how does their Forcefield fit? At first glance, you may consider the title of their third record a defence mechanism of sorts, coming as it does after the critical shoulder-shrug that met full-length debut Elephant Shell and 2010's better-received yet relatively straightforward Champ.

Eight and a half minutes in, such a thought process goes out the window, never to return. Tokyo Police Club are bulletproof now. Or, at the very least, they believe they are. How else do you explain not only straying from a formula that to date has delivered sharp, succinct indie-pop in droves but also opening in such a fashion? 'Argentina Pt. I, II & III' is nosebleed territory for the band that brought us the likes of 'Cheer It On', 'Nature of the Experiment', 'Graves' and 'Your English is Good'. Those vibrant bursts of energy represent Tokyo Police Club sole raison d'être, or so we thought.

It's not that they are an unambitious act, more that they've never really needed to stray from the script all that much. Champ, while good - sometimes very good - at what it did, seemed to suggest that TPC were content to only gradually evolve. It also established a backbone. Our style works, critics be damned. 'Argentina', with its three interlocking parts, stylistic shifts and subtle flourishes (the transition into the final section nods respectfully towards Billy Corgan), is less 'fuck you' - they're much too polite for that - and more hidden ace up the sleeve. It took time to get here. So let it play it out. Let it move, reach, dance and, crucially, flow.

David Monks, still playful, lets his own shield down. At first concerned with connecting a lover, dark corners and bright mornings, he later drops the act, repeating the key confession; "I don't want to want you like I want you". Later, he'll admit fault, "sometimes". A minute later, he'll revise his opinion to "most of the time". It's a bittersweet (and kinda bullshit) classic, looking back in anger, so sure that a second chance would fix everything. That it paints Tokyo Police Club's most forward-thinking song to date is quite triumphant.

The stage is set for total reinvention. Only… 'Argentina' is, save for a couple of sombre closing chapters, an exception, not the new rule. And here's the beauty. That's totally fine. It's totally fine even when 'Hot Tonight' immediately screeches in, as radio-friendly as you can get. It speaks of parties, of "drinking in the park" and "staring at the stars" and generally kicking back without a care in the world. It conjures up images of beer bottles and lens flare, only you're not thinking of what recognisable label adorns which bottle, what phone/search engine combo will steal focus. Instead, you flash back to summer nights won and lost and hope for more to come. Charm. You can't fake it, even if 'Hot Tonight' is totally questionable. Were it a debut single (and make no mistake, this is a 'single' with a capital S), you'd hate it, and you'd be right. Yet, somehow, Tokyo Police Club get away with it, despite being closer to 30 than they are to 20.

Again, charm. It's always been TPC's not-so-secret weapon. It's a party and you're invited. Simple. Monks keeps it simple throughout, and his record is better for it. Speaking to DiS earlier this month, he remarked that he 'learnt to let go of the one-liner.' Some fans might lament the loss of his dry missives, but he should be commended for clearing the path. It turns tracks like 'Miserable' and 'Beaches', each dealing with basic ideas and ideals, into direct hits. Sometimes, a slight stumble. 'Gonna Be Ready' and 'Tunnel Vision' are fine but no more than that. 'Through The Wire' and 'Feel The Effect' close nicely, paring it all back, their emotional base at once open and not entirely clear. It's nice to leave things with a couple of question marks attached for once. There is, however, one certainty; Tokyo Police Club have finally made small sound huge.