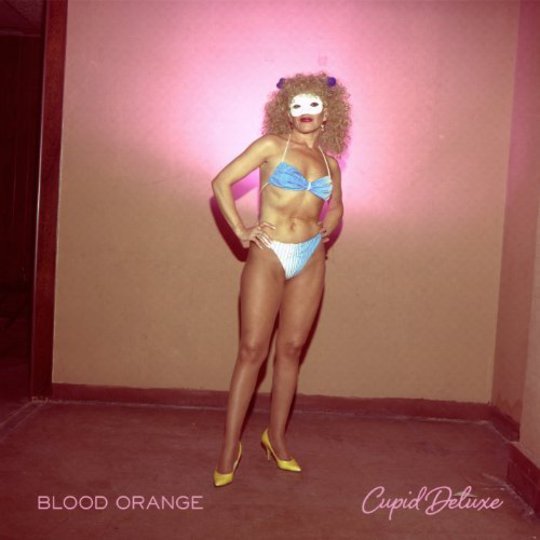 Blood Orange is one of the most exciting producers around today. Lending his artistic hand to arguably the best single of 2012 - Solange's 'Losing You' - as well as working with the likes of MKS and Sky Ferreira, Devonté Hynes has reinvented himself as a maestro in slick and sexy offerings. Cupid Deluxe is his second album under the Blood Orange alias, following 2011's debut Coastal Grooves, which proved that Hynes had well and truly left the folk-fuelled Lightspeed Champion and noise terror of Test Icicles far behind.

We first got a taste of Cupid Deluxe back in September, with the release of lead single 'Chamakay'. Kicking off with sparse, echoing drum thwacks and gorgeously delicate female vocals performed by Chairlift's Caroline Polachek, it's an apt introduction to the album - merging electronic instrumentation with extremely organic sounding vocals. Polachek and Hynes' vocals effortlessly blend together, producing a brilliant juxtaposition of bassy male undertones and fragile female falsetto. The bass really stands out here too - producing plenty of 'get outta here!' moments and slap-perfect, bottom-lip-biting licks. With the addition of a sultry, melodic saxophone finish, 'Chamakay' is damn catchy and will have its grip in your ears for days.

The funk-infused bass lines continue with a complimenting wah-wah guitar on 'You're Not Good Enough', channeling a whole-hearted Prince influence without falling into the copy-cat category. The synth introduction that melts into an early Eighties raucous proves Hynes talent for producing beats that are slicker than your average, with the breathy combination of Hynes and Friends' Samantha Urbani vocals stating "I never was in love // you know that you were never good enough" apposing the song's dance floor feel.

Having made the big move from Brooklyn to Manhattan during the writing and recording of Cupid Deluxe, the album is unsurprisingly, full of New York inspired sounds and imagery. This is most obvious during a soundbite interlude - showcasing street conversations with a bar band jamming in the background. This interlude then merges into 'Uncle Ace', a song immersed in disco influences, with Hynes' melodic talking providing the perfect layer for a strut-down-the-street listen. The horn accompanied outro showcases Hynes' ability to make the old and the new work together and further proving his talents with unexpected layered instrumentation.

This continues with the steel pan intro of 'It Is What It Is', perhaps influenced by his recent trip to his mother's hometown of Georgetown, Guyana, where he can be seen playing said instruments in the video for 'Chamakay'. The relaxed synth aesthetic works really well here, with the female vocals mimicking the delicacy of the traditional staccato piano additions. The saxophone makes another appearance during the electronic drum heavy 'Chosen', blending together Blood Orange's token repetitive bursts of electronic droplets that provide a backdrop to a sultry French-accented account. It could be cheesy, but Hynes manages to produce a relaxed, imagery filled, almost hypnotic melody.

The highlight of the album, however has to go to 'Clipped On', which features a wake-you-the-fuck-up verse from New York's Despot. Yet to release his own album, Despot has already gained a huge following due to his involvement in the underground hip-hop scene, as well as signing to El-P's Definitive Jux label back in 2004. It's a rare treat to hear new material from him and he doesn't disappoint with this guest appearance - showcasing an unmistakably precise rhythm that provides an old school sounding output that could easily be imagined on any corner in Queens. As one of the shorter songs on the album, his addition is quickly snatched away from our ears - teasing us into the final third of the record.

The female/male vocals continue throughout the album, meaning that Hynes rarely goes out alone. The combination works wonders but he could do with pushing himself into the spotlight a little more - saying that, his instrumentation and rhythms in his song structures do pretty much speak for themselves. We get another slap of hip-hop with Skepta's guest appearance on 'High Street'. His grime-infused vocals with that unmistaken London accent is a surprising addition to an album full of all things New York. Despite the song's brilliant dub-step influenced beats and Skepta's impeccable verses, it doesn't quite slot in with the rest of Cupid Deluxe - it feels almost too British for an album inspired by a move to Manhattan.

The album finishes with a coda harking back to 'Chamakay', as 'Time Will Tell's' lyrics also paying homage to 2011's 'Champagne Coast'. The simple, repetitive electronic drums and clunky piano chords complete with New York chatterings is an apt way to finish an album focussed on a city built upon layers of early hip-hop. Cupid Deluxe is arguably Hynes' finest work and an improvement on his debut release but he shouldn't be afraid to place himself centre stage instead of hiding behind a host of guest appearances.