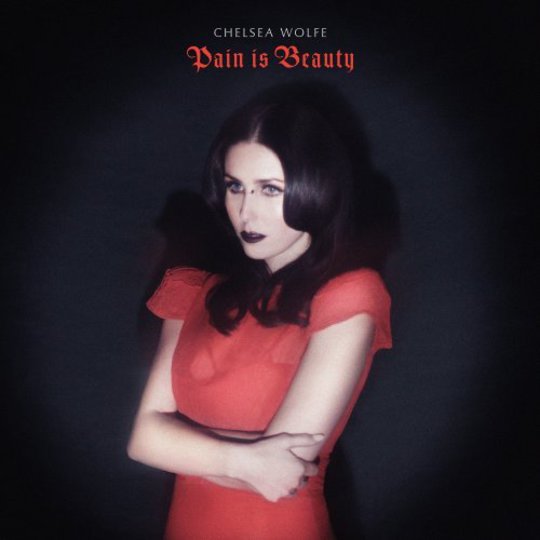 Of all the slightly ridiculous descriptions that have been applied to Chelsea Wolfe’s music over the last few years, that of ‘doom folk’ is probably most accurate, spiritually if not strictly musically. On Pain is Beauty, her fifth full-length, things are mostly amped up, but the bare, intimate nature of folk music remains. Of course, as the album title makes perfectly clear to all but the eternally over-optimistic, there’s a good deal of doom present as well.

Clanging opener ‘Feral Love’ makes this particularly apparent. Bristling with danger yet undeniably appealing, this song demonstrates clearer than ever Wolfe’s knack for crafting songs that really feel heavy. It’s a clarion call of an opener; a song that defines Wolfe’s mission statement to write powerful, unpredictable songs. The more elegiac ‘We Hit a Wall’ is similarly potent. Something close to what an OK Computer anthem like ‘Let Down’ might sound like if Thom Yorke had grown up listening to Trouble rather than R.E.M., it could prove a breakthrough hit, given that it holds a chorus the size of a large asteroid belt.

Arguably the crucial difference between Pain is Beauty and earlier Chelsea Wolfe records is its consistency. ‘Feral Love’ and ‘We Hit a Wall’ open the album with a high watermark that most artists would struggle to live up to across another ten tracks, but there are no such issues here. Much like PJ Harvey’s moodiest works, no songs loosen the intensity level here, no obvious opportunities for the tension created by tracks like ‘The Warden’ or ‘Sick’ to slide away. The latter in particular is a draining listen, somewhat reminiscent of something Swans may have produced in the nineties. It’s further evidence of the overbearing natural power of Wolfe’s mantric doom roots.

Of course, the murky world that Wolfe’s songs continue to inhabit on Pain is Beauty will undoubtedly prompt an increase in accusations from some quarters that the lady is a one-trick pony, but such criticism would be to miss the point. Not only is this Wolfe’s strongest collection of songs to date but it is also her most varied musically. There are moments that drift towards dark electronica, those that stick to tried and tested acoustic territory, and others that hint at a future direction making use of more grandiose song structures. In the latter camp, the eight minute ‘The Waves Have Come’ builds to its conclusion in almost post-rock oriented fashion, suggesting that, for all the 'singer-songwriter' element of her canon, Wolfe’s strongest moments are often down to the expansive options offered to her by her band.

If there’s to be one naggingly accurate reproach aimed at Pain is Beauty then it may be that it’s a little overlong. The intensity may not drop due to a lack of quality, but the album’s 55-minute-running time means that, towards the end of proceedings, one could be forgiven for thinking that the point has already been made. Wolfe’s songcraft is all there, and her often surprisingly dextrous musical approach deserves admiration, but Pain is Beauty perhaps feels just a little overwrought as it draws towards its final acts.

This small niggle aside, however, this is clearly the album that removes any lingering doubt that Chelsea Wolfe is a very special artist; one who is capable of the visceral and the surprisingly soothing in the same stroke. What’s most exciting is that, brilliant though Pain is Beauty is, there’s also the potential for something even more mind-blowing in the future.

Later... When the TV Turns to Static