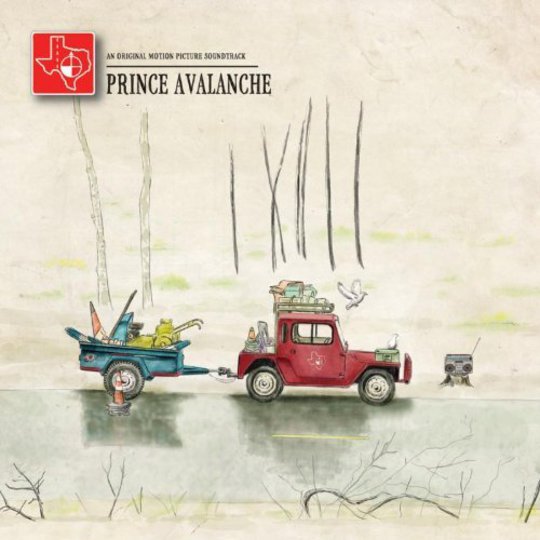 Prior to the release of 2011’s Take Care, Take Care, Take Care, Explosions In The Sky began to speak of change. They wrote a little differently, isolating themselves individually in a bid to change up a proven, if limited formula. They talked of experimentation, of different styles and flourishes never before associated with their output. In the end, the changes were effective if slight –‘Trembling Hands’ unusually immediate, some vocal flirtations and Godspeed-like samples peppered about here and there - no grand redesign, their sixth studio effort a fine if familiar offering.

Though their brand of instrumental rock – like Mogwai, the Texans continue to shy away from the ‘post-rock’ tag – brims with cinematic splendour, Explosions In The Sky rarely turn their attention to soundtracks, 2004’s Friday Night Lights the sole exception (and even that featured guest compositions and variations of previous originals) until now.

Prince Avalanche keeps them in their beloved Texas, the stakes smaller but human still, David Gordon Green’s no-budget indie film focusing on an unlikely partnership and subsequent self-discovery. Its score brings together our quiet/loud/quiet heroes and David Wingo, leader of the pensive Ola Podrida and regular Green collaborator. As with the protagonists of their parent film, the two separate forces really aren’t all that different, their union bearing strange fruit, those significant changes at last realised for Explosions In The Sky.

As an opener, ‘Fires’ is helpful, acting as something of a bridge between what we may come to expect from Explosions and what this project ultimately wrung from them. It makes its point quickly, a haze of ethereal gleam and crackling embers before a prolonged moment of tranquility. The stage set, ‘Theme From Prince Avalanche’ emerges as playful subterfuge, our cast playing to type just for a moment before a glorious shuffle into soft piano and finger-picked acoustic guitar replete with requisite scratches. Cute, though thankfully not twee. Soundtrack work brings with it very specific trappings that can stifle particularly creative musicians – Anthony Gonzalez’s turn on the Oblivion score is just one recent example of many – but Explosions In The Sky feel free here, ‘Dear Madison’ climbing further, a driving rhythm aided by carefully placed guitars, that signature sound blending seamlessly.

There are recurring themes throughout Prince Avalanche, the likes of ‘Passing Time’ and ‘Rain’ treading recently established ground. It’s pleasingly organic in a way that, say, Christopher Owens’ overuse of a reprisal sting on his muddled Lysandre failed to be. Here, the callbacks interlock with arrangements that acknowledge and appreciate their presence. They build to bigger connections on a record where Explosions In The Sky deliberately steer away from crashing drums and aggressive crescendos. In their place, a lean narrative, Wingo keeping compositions tight and only really letting his charges off the leash as things approach an inevitable yet earned conclusion.

Of that run, ‘Join Me On My Avalanche’ benefits from the contemplative half hour that came before it, allowing for the element of surprise when Explosions In The Sky seize the moment, the pace quickening, the tremolo teases and percussive strikes heightened now, a reminder that their day job remains a most exquisite practice. The closing ‘Send Off’ offers more of this, though it’s grounded by that scratchy guitar again, a subtle constant as the music rises in several triumphant directions. Prince Avalanche, regardless of what takes the screen, concerns artists returning to their roots. It’s an experiment in construction, its sandbox carefully sparse. Fitting then, that Explosions In The Sky find that elusive spark and thrive in such surroundings.