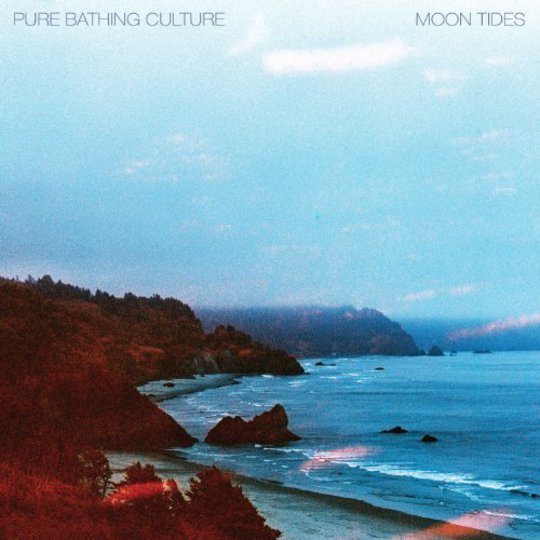 Besides the album being inspired by tides and water - the element 'often associated with human emotion', they report - and besides the relaxing images their name evokes, it is the hybrid nature of their sound, at once so obfuscating and gleaming, which perfectly suits transitions.

With a background as members of folksters Vetiver and recent collaborators with Damien Jurado and Foxygen respectively, guitarist Daniel Hindman and keyboardist/singer Sarah Versprille are often compared to Fleetwood Mac (whose hit 'Dreams' they masterly covered for a tribute compilation also from last year), but it's the refined, washed out reverie of Cocteau Twins and Prefab Sprout that instantly comes to mind.

Produced by Shins-keyboardist and singer-songwriter Richard Swift, Moon Tides merges a tenuous, vaguely danceable electro-pop with a folksy substance made of glorious melodies. All the songs on the record follow the same ritual: a bouncing drum machine pattern kicks in, Hindman's shimmering guitars slowly emerge and fluctuate until Versprille's crystalline vocals take off, usually soaked in layers of synths and reverb. The effect is enchanting.

As the two gorgeous singles 'Pendulum' and 'Dream The Dare' revealed, PBC's melodies are lush and unforgettable, but the production is hazy enough to complicate things by adding a dark tone to the beauty of the arrangements. It is not a coincidence the two like trafficking in the mystical: 'Concepts of spirituality, self-actualization, mysticism, new age symbolism and pretty much everything that has to do with humans making sense of why we're all here are all deep, deep muses for us'.

The songs are visionary enough to match their ambitions. Versprille's vocals prove to be extremely flexible, switching from the ominous, siren-like croon featured on songs such as the turbulent 'Temples of The Moon', which relies on repetition and distant atmospherics like a The Dreaming-era Kate Bush's cut, to the joyous chanting on 'Only Lonely Lovers'. When feelings get too neatly distinguishable, the duo walk on a tightrope. The mythology-inspired 'Twins' heavily flirts with new age optimism and reaches stasis a notch too soon, whilst the chorus of 'Only Lonely Lovers' is so outrageously cheerful it almost feels like it's there to test your nerves. But fear not: it is the charming, ambivalent tension already found in the singles which prevails on the record, as the lilting 'Evergreen' and 'Seven 2 One' demonstrate.

Occasionally PBC accentuate their Eighties adult pop influences by taking layers away, such as in the standout 'Scotty', which sounds like Phil Collins in the best possible way. In a similar vein, 'Golden Girl' is quite stripped down compared to the rest, and comes out as a danceable, soulful little tune, where Versprille's vocals are more discernible than usual and Hindman's murmuring electric guitar lines rise and fall like a wave in the background. Whether it is a sense of longing or nostalgia at stake, Moon Tides is a solid, inebriating listen that will guide you through your personal transitions and leave you wanting for more.