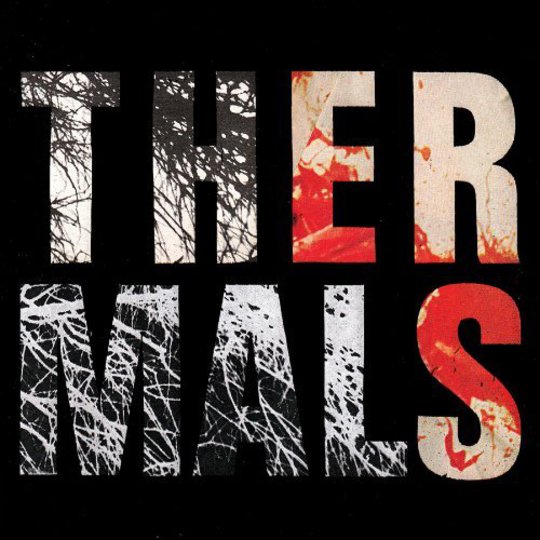 With their 2006 breakthrough album The Body, the Blood, the Machine, The Thermals essentially provided the American Idiot that dyed-in-the-wool indie kids could like, carrying the ragged melodicism of the Pavements/Guided by Voices of this world in its (slightly) gentler moments and having Fugazi’s sticksman Brendan Canty on production duties.

Their lo-fi sonic asceticism is undoubtedly a matter of choice rather than necessity, considering that previous and subsequent Thermals albums (Fuckin A and Personal Life respectively) have been produced by Death Cab For Cutie guitarist Chris Walla, who counts the significantly poppier chimes of Tegan and Sara and the expansive folk-pop of The Decemberists amongst his production credits.

Be it as it may that these indie/DIY signifiers are what earns The Thermals the 'post' prefix to their punk-pop, their real virtues are split between the universal (tunes as catchy as they are mercilessly to-the-point) and the esoteric (intriguingly specific album concepts such as 'a young couple fleeing a fascist faux-Christian USA' and 'monogamy' as a realisation of a peculiarly personal brand of political rhetoric).

The Thermals have described sixth album Desperate Ground as a cross between their debut More Parts Per Million and their magnum opus, The Body…, which is certainly true in as much as it revives the scrappy, lo-fi, full throttle spirit of More Part Per Million although the beefier low end afforded by studio recording puts it more on a par with follow-up album Fuckin A.

The album ostensibly “tells the (murky) tale of a lone rogue in the night. One man, one path, one sword. An unceasing urge to destroy. A never-ending battle against the forces of nature. A destiny impossible to avoid." Whilst echoing the pseudo-apocalyptic mood of The Body… the protagonist of its conceptual narrative is the inverse of that album’s fleeing couple, rushing into the heat of the battle as opening track ‘Born To Kill’ puts it “Made to slay, unafraid to spill blood on the land”. Such violent imagery persists throughout Desperate Ground, such as the titular blade of the oddly archaic ‘The Sword by My Side’, which Harris wailingly boasts “…will allow me to be the last thing my enemies see”.

However, lyrically grisly as it may appear on the surface the album’s narrative appears to gradually unveil romance as the motive. The solitary figure of ‘I Go Alone’ dreams of war, but insists “I have to leave to save you my love” whereas on ‘You Will Find Me’ he is constantly looking his shoulder for his lover in expectation and hope. In fact for an album supposedly focussed on an “urge to destroy” that crazy little thing called love crops up a helluva a lot especially on the album’s second half; see ‘Faces Stay With Me’ (“ I picture your face, it’s all I can see”), ‘Where I Stand’ (“I will love you when I can until they kill me where I stand”) and revealing statement of album closer ‘Our Love Survives’ (“’Our love is true, it’s why we fight”). It’s a triumphant note to end on as the album thematically unravels, reveals itself and then coalesces in simple, but beautiful fashion. Perhaps it’s the very marriage of the savage with romantic that makes each part palatable.

It’s disappointing then that the music itself provides an insufficient canvas for the record’s themes. In reverting to a more raw and simplistic sound they gain visceral vigour, but lack the dexterity and subtlety to do the words justice. In fairness The Thermals retain a pop sensibility that means that there are no total duds, in fact it’s all very catchy and heart pumping, but you can only write so many hi-tempo, powerchord driven punk-pop songs before they all start blending into one in your consciousness. Even coming in at under half an hour it becomes a bit of a slog and discourages the repeat listens which Harris’ lyrics deserve. Unsurprisingly the slightly more restrained minor chord strumming of ‘The Sunset’ and ‘The Howls of the Wind’ are standouts, with greater melodrama possible when freed from the shackles of unrelenting urgency. Perhaps these are strengths which they habitually ignore. As it is it feels as if The Thermals are still a band in awkward transition resulting in a record that is reliably good by their own decent standards, but which fails to fulfil its very apparent potential to be great.