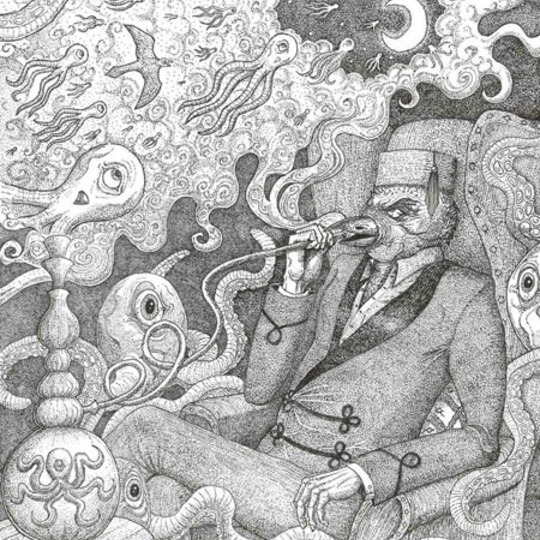 For more than a decade, Hey Colossus has straddled the divide between sludgy stoner metal and post-rock, churning out some of the best noise albums the UK has seen.

With Cuckoo Live Life Like Cuckoo, a new member - former Part Chimp guitarist and vocalist Tim Cedar - has swelled their numbers to eight. And with him the band seem to have reached a new level of excitement, inventiveness and sheer lunacy.

It's clear from the very beginning of first track 'Hot Grave' that the band has tapped into something dark and crazy in their South London studios. Hey Colossus have always been a deft touch at welding slabs of heavy guitar to an unholy groove, but the six-minute opener is a clear step up, an insistent driving rhythm paired with the deranged vocal snarl of a fresh-risen corpse with a boner and a revenge fantasy.

Excellently-titled track three, 'How to Tell Time with Jesus', takes us to an even weirder place. The centrepiece of this album plunges us into a bizarre sonic landscape, part psychedelic desert trip, part religious rapture. Five minutes of looped guitar peppered with incomprehensible speaking-in-tongues outbursts give way to a twisting, snake-like expansion of the central motif. Get too deep in, and the song drags you around and down a deep dark hole chased by eerie chanting and haunted whispers, until you and Hey Colussus finally sputters and flops, deflated like an exhausted Deep South preacher.

Long-time listeners shouldn't panic. The band's familiar hypnotic sonic textures play a major role in the album. especially on tracks like 'Oktave Doktor', 'Leather Lake' and 'English Flesh'. There's no shortage of gigantic riffs splashing you in the face like breezeblocks. Still, there's an element of free-association present throughout. Vocals are often semi-audible, drifting in and out and only letting you catch snippets of phrases. Guitar and bass lines are stretched further than ever before, looping over and over; over and over; over and over almost beyond breaking point.

If there's a musical reference point, it's mid-Nineties industrial metal - echoes of Earacheera Pitchshifter, heroin-addled Reznor - especially the Natural Born Killers soundtrack - and even Fear Factory's occasional moments of genuine experimentation. However, it's all filtered through the thick clay and deposited like a mutant birth, all misshapen limbs and twisted angles.

In fact, when clear, clarion chords ring out at the beginning of closer 'Pit and Hope', it's almost a relief- but you can't help steeling yourself for a further surprise aural assault. The bastards know this, and instead carve out a reflective downtuned soundscape, albeit interspersed with the no -familiar madman vocals, gibbering and chattering like a Hyde Park prophet. It almost makes you want to go for a bit of lie down when it's done.

Cuckoo Live Life Like Cuckoo is Hey Colussus taking their past, screwing up the rule book and cackling like lunatics. Perhaps they've been touched by God. Perhaps by the Devil. Whichever it is, it's lifted them out of the sludge into a new, much weirder but much more interesting place.