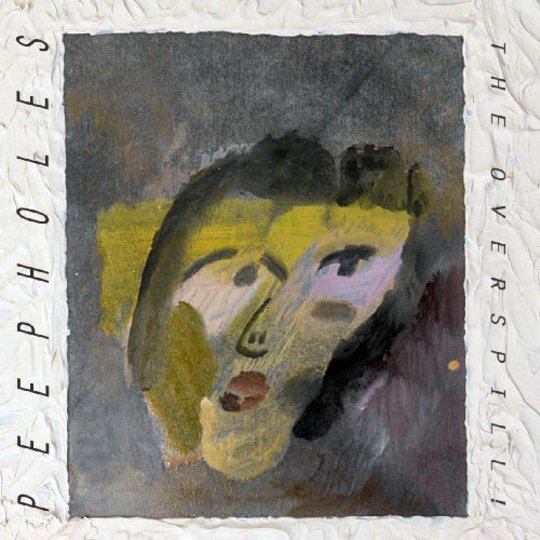 Peepholes are a one part Brighton (via Northern Ireland via Bahrain) and one part London team that have been brewing something special since 2006 with their warbling synthetic explorations into sound. On and off they have played inspiring live shows, released cassettes, an EP on defunct Brighton indie label Hungry for Power, mini album Caligula and now their first full length sees the dark of the night, powered by ingeniously innovative music catalogger Upset the Rhythm. This is their third outing with Upset the Rhythm, but this release goes one stage further and makes a bold statement. Now their sound is firmly formulated, the tea bag has been drained, leaving an unexpected pungent Peepholes concentrate behind and ready to serve.

In the past they worked with sound engineer extraordinaire Shelley Ostapovitch, best known for her involvement with Throbbing Gristle and Hidden Cameras, but this time round Peepholes synth operator Nick Carlisle takes the reins. And the fact it is Nick is testament to the new confidence Peepholes have found. The distant rattle and explorations of the previous releases fade in into the background and the new sound rears a concoction of visceral Eighties post punk synth stylings mixed with tufts of tribal witchiness and a tab of krautrock to rocket along. More simply put, it's like Factory Floor just let their hair down.

On the surface the general construction of songs appears to consist of a filthy pulsating electronic bass, intricately placed rhythmical smatterings from the drums provided by Katia Barrett, layered with sweeter synth sounds and haunting delayed vocals. If this music was a place it would be an abandoned warehouse ravished by paganic miscreants, kind of The Aztec Zone meets The Industrial Zone.

And if that all sounds too chaotic, at times the aural outpourings converge, they become aqueous; stand out songs form that are ready for a right remixing or formulated for the dancefloor. There is the second track 'Conversation' with its lyrical mantra: "hustler, gaylord, his law, conversation" packed up against militant drums, haunting layered male/female vocals and Eighties science program synths. Then there is the machine generated pan pipe jump up of 'Keyhain', with ghostly vocals singing: "how did you break the keychain, don't ever change the lock". And lastly marching title track 'The Overspill!', dragging along traces of delayed bass and undercover media whoring lyric 'saw your face on a poster'. This is preceded by album closer 'Living in Qatar', that keeps the pop treadmill alive for a time before dissolving into a hypnotic haunted kraut inspired ramble.

With its one exclamation (could have easily been three or four), The Overspill! reflects the new found sound ideals of it's label UtR and provides evidence of a band in its hey day. Here are of some of the most atmospherically interesting, creative and original sounds around.