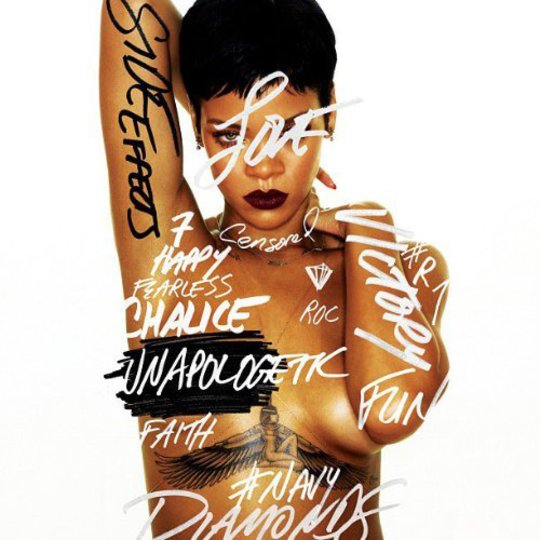 What exactly does Rihanna have to apologise for? In many respects, she is one of the least offensive popstars on the planet. Granted, she smokes the occasional joint, performs on The X Factor in trainers with ‘fuck off’ embossed on them and poses for nude photoshoots on an almost monthly basis but this is all par for the modern popstar course. It has been since Madonna reinvented the archetype way back in the Eighties.

These kind of activities generate page views, column inches and sales of over 100 million downloads in 100 countries. You’d struggle to believe they inspire genuine outrage too. Rihanna albums are like advent calendars: they come out once a year near Christmas, you enjoy their cheap sugar rush for a month and you rarely return to them again. The template adopted by Talk That Talk, Loud and Rated R revolves around packaging some A-list singles around enough passable filler to pack out the radio airwaves for another 12 months. There’s nothing especially bad about these records, nor is there anything to suggest the Barbadian singer’s best album won’t be her greatest hits.

Clearly then, the title of Unapologetic refers to its contents rather than any past grievances. The idea that Rihanna can explicitly kiss and make up with Chris Brown, after he received five years probation for assaulting her, and no one can do anything to stop her. This in itself is shocking to listen to although not in the least bit surprising if you’ve had an eye on Rihanna’s post-2009 trajectory. There was the flirtation with sexual domination in ‘Rude Boy’ and ‘S&M’, the domestic violence-infused Eminem collaboration ‘Love The Way You Lie’ and, of course, the remixes with Chris Brown on ‘Turn Up The Music’ and ‘Birthday Cake’. Together, these instances all form a narrative where past tragedy is embedded right into the fabric of the world’s most popular popstar.

Perhaps inevitably, Chris Brown duet ‘Nobody’s Business’ is the standout track on Unapologetic. On an album that’s mildly abrasive and not a lot of fun, its piano-lead stomp and teasing vocal interplay are actually enjoyable. Or they would be if you could forget the context surrounding lines like, “Your love is perfection, please point me in the right direction.” Reminiscent of listening to an early Odd Future mixtape, there’s an undeniable craft at work which takes an active choice to embrace. Most pop songs are aimed at making you drink, dance or both. ‘Nobody’s Business’ makes you want to write a long, worthy think piece so you can come to terms with your own moral standing on it.

If you want to view the rest of Rihanna’s seventh album through this black hole of flagrant provocation, you’re provided with plenty of ammunition. “What’s love without tragedy?” she pleas on ‘Love Tragedy/Mother Mary’ before dominating ‘No Love Allowed’ with a series of disturbing motifs, “Like a bullet your love hit me to the core, I was flying til you knocked me to the floor”. Really, you’re better off just sticking on one of 2012’s many other fine pop albums because Lana Del Rey, Labrinth, Jessie Ware and Justin Bieber all have much more to offer.

‘Jump’ sees Rihanna in standard sexpot mode playing the eternal temptress between grizzled throbs of bass and squealing synth. ‘Stay’ is a decent stab at a restrained ballad written by Justin Parker, a.k.a. the bloke behind ‘Video Games’, and performed with a rare vocal solemnity. When it comes to songs with any staying power, that’s really it. Despite the mountains of cash which have been thrown at Unapologetic’s tracklisting, most of its contributors seem to have picked up their paycheck and not done much more. ‘Diamonds’ is a Sia-by-numbers song, David Guetta does David Guetta on ‘Right Now’ and ‘Get It Over With’ sees Brian Kennedy fall well short of his past calling card, ‘Disturbia’.

In spite of Rihanna’s best efforts, Unapologetic is more depressing than offensive. Millions will listen to this LP and go through the process of assimilating or rejecting the general thrust of what they hear. My suspicion is that they will not spend very long over that decision because, above everything else, this is not a very good album.