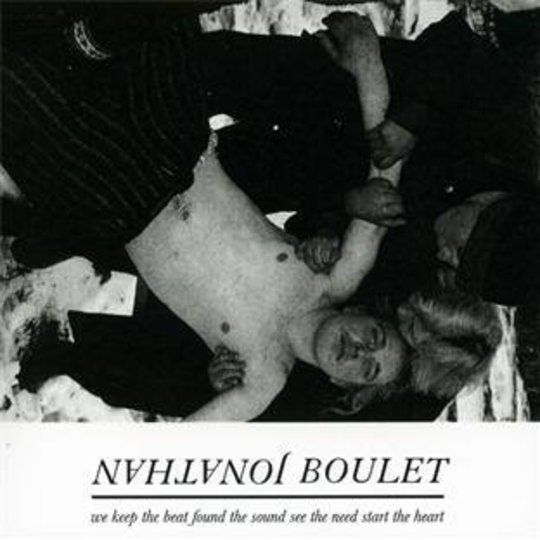 Things went downhill fast, which is a pity since I felt we had made up some ground as we talked about more than the what isn’t important stuff. Then some tool came along, interrupted our conversation and started asking me about the bottle of Budweiser that I wasn’t drinking, it was actually a Red Stripe. There goes the night, and it had all started so promisingly. A rage descended, I ripped off the pink wristband that gained us free entry and two shots of what tasted like Calpol Six Plus. Rattled, I felt like Barry Horowitz, a tough loser who was on a bad roll.

As I walked to work back home with my tail between my legs, performing what could best be described as a self-administered wedgie, I may as well tell you that Jonathan Boulet soundtracked each stride. The Boulet album has become important to me at this time because I have been going through the motions somewhat and when you need distraction, something to occupy thoughts, and negotiate through the weeds that tangle with ‘feelings’, music tends to drag you through.

In many ways Australian renaissance man Jonathan Boulet has become my lighthouse, guiding me through what has become an enormous grey period. In what has musically speaking been a year full of hit and misses, of erratic moments of brilliance mixed with duffers that the skip treatment, it makes a nice change that We Keep The Beat, Found The Sound, See The Need, Start The Heart lacks filler. Though many of the songs do sound similar, saying they sound the same would be unfair. Let’s just say they mostly come from the same heavy duty template.

I don’t fully understand why this album has come to hold personal significance for me; especially given that my initial listening sorties were a track there, a track here, trying to find time to take it in. The experience dissolved into my daily life, and made me wonder if this album would even raise an eyebrow. I eventually found an entry point through ‘Trounce’, a stampeding horse that kicks off its shoes and runs amok. It sure sounds aggressive, but the song appears to be about satirizing mindless meatheads who have no control of their thoughts and actions. There is something distinctly Australian about this. “I do what I’m told / I just don’t know any better”. You could also read the song as an ode to the male psyche, a hunter gatherer confused as to where he stands, and what kind of man he should be.

Given that Boulet is by trade a drummer, having spent time hitting the skins for Parades, the importance of pounding, bashing and smashing propels the album along a primal path. When the gates swing open ‘You’re A Animal’ delivers a beam of euphoria. The hypnotic chants make a play for festival togetherness under the influence of herbal highs purchased from Latvian street vendors selling Miracle-gro plant food wrapped in tin foil. There are several moments on the album when it seems appropriate to join in with the fun.

What makes We Keep The Beat… work is that it doesn’t deviate too much from the beaten track, the juggernaut rhythms terrify the ear canals. Boulet has a successful formula - add a dollop of drums, stand arms aloft, before finally stirring in the rough and ready macho reluctantly. Songs like ‘Hallowed Hag’ and ‘Mangle Twig’ seem separated at birth as Boulet adapts and tweaks the formula, making subtle differences that somehow keep the listener interested.

This album is indebted to having faith in the keeping it simple approach, and with that in mind Boulet has polished up any experimental edges, and made an album that sounds welcoming, which is why I fell for the damn thing. Now, has Boulet conned me here? Here’s an album that I’ve related to, because I’m easily swayed by anything which seems to be hinting at covering the fall of masculinity. Boulet has almost made a parody of confused feelings in this collection, of unfocused aggression, of unorthodox intensity. The multi-tracked harmonies create the impression that we’re all together, singing along in unison, when really we’re not. Boulet is down by the river with his fishing pole and a bottle of 'shine, waiting to reel more suckers in.