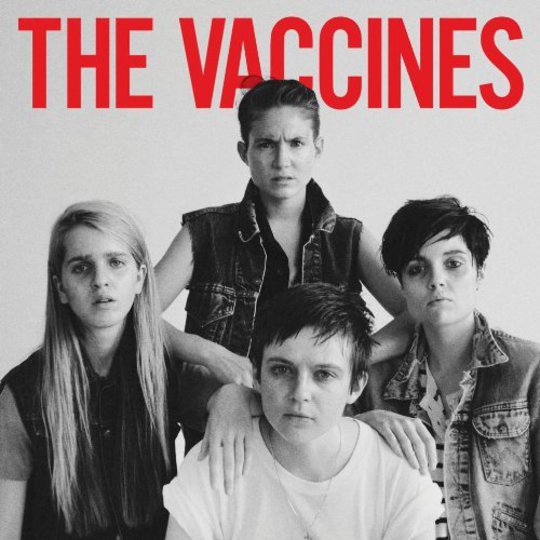 It seems neither respectful, nor enlightened to begin a review of any band's second album by bringing up a point about their first, but this point is (a) about the transition between the two, (b) somewhat inevitable and (c) fuck it, this isn't a tea party and I’m not going to keep my elbows off the fucking table. So... after the final track of What Did You Expect From... there is a hidden track (‘Somebody Else’s Child’). A stately, haunted, hugely personal piano fugue with an unexpected chord change that kinda makes it transcendental. 'Ah!' I thought, 'these boys have got some guile. Doesn't this bode well for the quality of songwriting on their second album? They'll surprise some haters yet. I may as well start going round telling every naysayer who pipes up that when the mushroom cloud of hype dust settles the world is in for a treat and then they'll get out of my life and shut up.'

Or at least say, 'Yeah, The Vaccines have some good ideas and are a good band and I was terribly, terribly mistaken by thinking they were just a Home Counties facsimile of The Strokes but seven years too late.' And then came this - a comment about as perceptive, insightful and helpful as an owner addressing their pet and saying: 'You should eat cat food because you're a cat': 'Ethan Johns told us to make a live record because we're a live band.'

Well, erm... Yeah, but... Oh, never mind. If you want to risk decimating what made you at once derivative, unique and charming, then I suppose you won’t be told otherwise. Particularly if you're egged on by the sharp end of a musical dynasty.

There's always a struggle to achieve some semblance of equilibrium between crafting something forward looking and ambitious, versus hitting ‘record’ and blitzing through something raw, sexual and in display of enough energy to basically jack-off in your ears in some deranged rock-fit-of-pique. What Did You Expect From... created its own reverb saturated tribute world to the girl groups, The Ramones and The Jesus & Mary Chain and came out gorgeously, if not a little over pressured with hype. A hype-busting live approach seems great as long as it’s not at the expense of the very warm sound that made the first album so brilliant. As long as its not some demo mess of bum notes and ill timed feedback and the bassist falling over and knocking over the high hat stand and all that being left in for character. And songs would help too.

Already this year The Cribs have made an incredible record with a back-to-the-egg agenda, and given that Spector have made a pretty sterling effort from a slightly similar blueprint to What Did You Expect From... are The Vaccines destined for Great Britain's twentieth able-bodied bronze of 2012? Rock, hard-place?

Not really. Thank fuck that they have delivered what we have come to expect from The Vaccines.

‘No Hope’, ‘I Always Knew’ and ‘Teenage Icon’ all explode into dealing with their new status, musically and lyrically. All chiming surf-guitars and rolling drums and "wooooooahs" and "oooooooohs" and sure-footed anthemic choruses.

At the very mention of worshipping George Harrison , Justin starts asserting how unwavering his decisions are again on ‘All In Vain' before collapsing into a manicured garden maze of a middle section.

'Ghost Town' is a regrettable Cramps-pastiche that carries a triple threat in terms of flaws. 1. Being called the same thing as an already untouchable UK single. 2. Starting with a rock cliche about "driving in my car". 3. Being a silly Cramps pastiche. ‘Bad Mood’ is similar sounding but worse. It's about being in a bad mood. Which is shit.

'Aftershave Ocean' would be an utterly irresistible early McCartney-penned Beatles track if it were called ‘Coming Up For Air’ as it should be and not ‘Aftershave Ocean’ which is shit. As it is, it is ever-so-slightly resistable.

There's no dramatic left turn on ...Come Of Age as some people are not shutting up about, but for the most part its a definite development. If anything they've flipped the follow-up pattern on its head and got the one-two punches of debut and follow up round the wrong way - the faster songs more urgent and rowdier in a more direct way, the slower, slightly less crafted at the expense of what we assumed was part of their identity, but all heart and intimacy nonetheless. (This is illustrated pretty well by final track ‘Lonely World’. It is the most like the debut on this outing and yet it closes it.) It wasn’t just reverb and imitation though. There was an actual charm, character and talent outside of that all along and everything’s 80 per cent mimicry anyway. ‘If You Wanna’ (http://www.youtube.com/watch?v=uQKjI6395iU) was really average but had such confidence that it put them in the Radio 1 window and kept them there and that confidence has blossomed with the songwriting. So, haters, the world is in for a treat and now you can get out of my life and shut up. Thank you.

[Note – Special mention must go to the pre-album, free download E.P. of naked acoustic covers: Please, Please Do Not Disturb… (http://www.thevaccines.co.uk/gb/news/2012-08-09/free-ep-to-download/ ) (they just love that title - band name tie-in, don’t they? That’s a bit annoying, isn’t it? Anyway…). The covers of Wire’s ‘Mannequin’ and Abba’s ‘The Winner Takes It All’ are absolutely brilliant.]