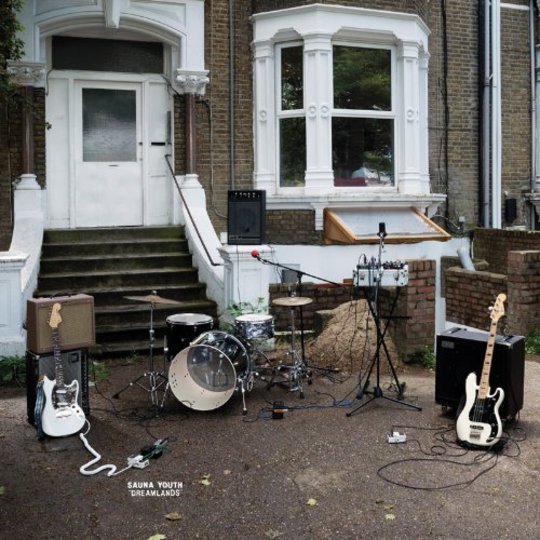 Music tends to be so culturally tangled with art, poetry and politics as to allow pretty much anyone to claim anything for the racket they cook up. Art is in the eye of the beholder, the demarcation between lyrics and poetry is vague and – never mind if you’re just singing about old girlfriends and bad nights out – they say the personal is political, don’t they? Sauna Youth, a quartet from London and Brighton who have existed for about three years, are germane to this line of thinking, even if they don’t seem to make a big deal of it themselves. Most of the band have exhibited or sold art or poetry, while ‘Town Called Distraction’ – the side-long opener of Dreamlands, the debut Sauna Youth LP – is a piece of short fiction set to music, the third time the group have adorned a release with such.

‘Town Called Distraction’ differs from SY’s previous spoken word turns, in that the music – drum-powered psychedelic garage stomp with echoes of Hüsker Dü’s ‘Reoccurring Dreams’ – has a demonstrable connection to the other songs on the record. When they dished this up on their earlier cassettes, it seemed almost too calculated an attempt to distinguish themselves from their past ventures: members had variously played in Twofold, Captain Everything and The Steal, punk bands who were all liked in a Big Cheese magazine kind of way, but scarcely seemed likely to prod the boundaries of their genre. Still, if it weighed on Sauna Youth’s collective mind then, the six-track Dreamlands doesn’t suggest it’s an issue now. While not a hugely original record, it’s one with an outlook both distinguished and distinguishable.

Their thematic fuel, their lyrical glue, is the mundanities of life – dwelled on and picked apart to the point of obsessiveness. For ‘Town Called Distraction’’s ten minutes of narration, a man stands in a supermarket and weighs up the option of buying discounted flowers; a woman catches a bus and reads a newspaper cover to cover. That really is pretty much all that happens. ‘Snapback’, 129 seconds of herbertish clatter plausibly borrowing from either Jay Reatard or The Members, seems to be about someone who walks the streets alone to aid the creative process. “Took his left foot and placed it in front of his right / Hands in his pockets, steps out into the night,” it starts – and for why? “He’s writing books no-one will ever read / Singing songs no-one will ever need.” When human interaction is awarded the spotlight, on ‘Hairstyles’, it’s in the form of an awkward conversation-cum-courtship at a party, between two people with nothing to say to each other. “You and I, we share common traits / Inability to communicate,” laments Richard Phoenix on ‘PSI Girls’, a repetitive midpacer equal parts Neu! and The Oh Sees. No-one comes out of a Sauna Youth song looking too good, in short.

They’re a punk band though, is the thing, and punk has done this blank-eyed, chronicles-of-the-banal thing with greater zeal than any other genre. In this respect, Dreamlands places itself in a lineage which includes the Buzzcocks, Flipper, the Descendents, Slint, pre-1995 Green Day and Pissed Jeans. This tells you next to nothing about what the record sounds like, but ought to suggest quite how embedded this aesthetic is in punk. Only on ‘Viscount Discount’ does a sense of anger rear up: maybe aimed at an individual, but phrased to fit anyone whose jobsworth careerism renders them “a part of the constant grinding machine”.

Maybe you were raised on the idea that punk should be angry, and for that matter political and polemical. Maybe the members of Sauna Youth were, too. Maybe their lyrical fixations are another way they counter expectation; maybe their retreat from easily categorised rock-song obsessions is itself an ideological gesture. Maybe they think that other current DIY combos from southern England, such as Hygiene and The Pheromoans, are making music worth emulating and standing alongside. Just maybe, mind you. For an album chiefly given over to quick, simple-pleasure garage punk bashers, Dreamlands is not one for easy answers.