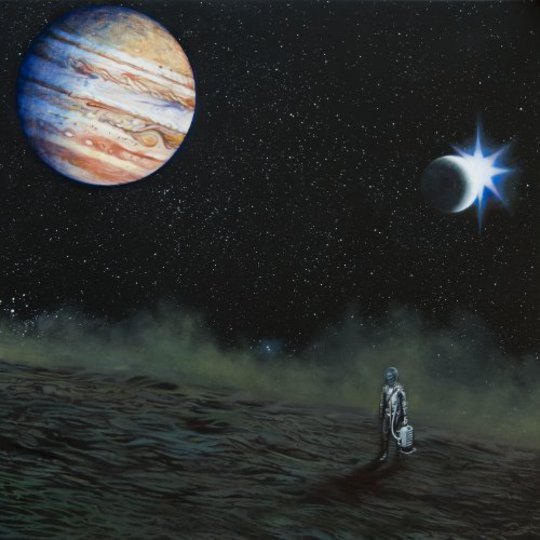 On record, Ben Chasny has tended towards the acoustic when performing under the guise of Six Organs Of Admittance. Occasional spasms of electrifying fretwork have sparked into life on previous records, and his playing could hardly be described as gentle, but until now the best way to hear Chasny in full on freak out mode has been live or as a part of his other band, Comets On Fire.

He’s certainly making up for the lack of heavy dosage riffing on this, the thirteenth Six Organs... record. Joined by those Comets On Fire bandmates but with Chasny very much in the driving seat, Ascent is pretty much turned up to 11 from start to finish. It’s a heavy record, in every sense of the word – in volume, in ideas, in dense, intricate musicianship. How you react to such intense doses of psychedelia will have a heavy bearing on your feelings towards Ascent.

Basically, if you don’t like extensive instrumental passages, guitar solos and patchouli-scented words like ‘jam’ or ‘freakout’, you should give Ascent the widest berth possible. If you do like that kind of thing, this record could make your year.

Listen to the album whole, and it basically feels like a run through of every page in the psychedelic rock handbook. (50 Shades Of Haze? No? Sorry). Opener ‘Waswasa’ could be a Queens Of The Stone Age track, all robotic riff, growled vocals and thunderous drums. The main riff will stick in your mind like chewing gum in a child’s hair. The exploratory solo could melt faces, and the whole thing drives along with reckless abandon.

It’s followed by such a contrast in the form of ‘Close To The Sky’, a snaking track that could have been lifted straight from a Sleepy Sun LP. Chasny’s high, spooked vocals make their first appearance here, adding to the air of blissed out desert happening caught on tape. The next box to be ticked is drone-rock, thanks to ‘They Called You Near’, which aches for two minutes before an electrifying raga rises to the surface and races for the sunset. At this point, three tracks into the record, you could be forgiven for feeling ready for a sit down and something a little less intense.

Luckily, Chasny chooses this moment for perhaps the most beautiful moment on the LP, the hazy, blissed-out ‘Solar Ascent’. A melancholic sweep across barren landscapes and explosive guitar noise, it’s a terrific lesson in how much can be created with minimal ingredients. It’s also another take on fret-heavy psychedelia on a record that seems crafted solely to provide pristine examples of each take on the genre. The only style that’s revisited more than once is the desert rock of ‘Close To The Sky’, which is approached again on the epic ‘Even If You Knew’, which gallops off in another blaze of violent, expressionist solos. Even the acoustics come out for ‘Your Ghost’, which offers gentle respite from the full on guitar attack that lurks behind most of the other corners here.

Across its eight tracks, Ascent really does cover a lot of ground, with an extraordinary blend of tenderness and ferocity. Does it fit together, thematically, with so many changes in direction? Actually, it does, thanks to the constant presence of Chasny’s dexterous guitar work, regardless of the style he’s playing. It does make you wonder why Chasny has never been tempted to break out the electric guitars on record up to now, and it does make you hanker for a chance to experience it live, in all its preposterous glory. If you’re tempted to go for a heavy dose of head nodding psychedelia any time soon, you probably won’t find a better example released this year.