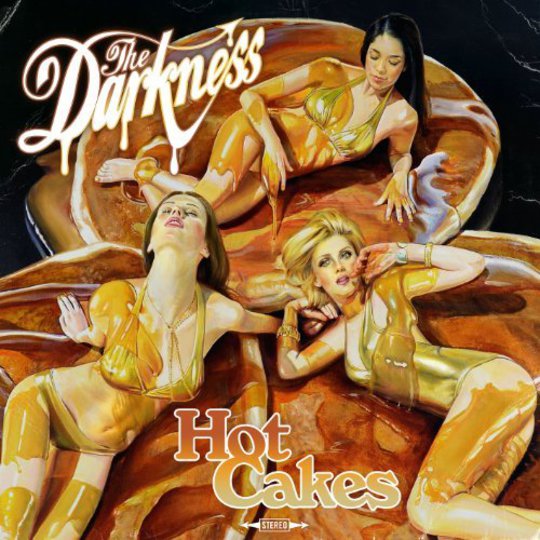 Like fish in a barrel or Ravi Bopara’s Test record, spandex-clad rockers The Darkness are something of an easy target. Still, despite looking a bit silly and not really making proper albums as such, there’s quite a lot to be said in their defence. Their utter defiance of all that is po-faced and refusal to take themselves even remotely seriously is endearing to all but the most hard-bitten cynic, they are - or were - capable of pushing out a stupid, catchy, enjoyable hit (‘Growing on Me’ and ‘I Believe in a Thing Called Love’ were at least good for a crowd sing along), and their debut album Permission to Land was pretty funny back when it came out in 2003. Furthermore Justin Hawkins and co have always been good to us purveyors of indie music, even putting a shout out to little old DiS at Reading a few years ago.

Now though, in a move similar to the BBC putting out another series of My Family, the same tiring joke is being told again in the form of third album Hot Cakes. Getting right into the spirit of the aged rock bands they pastiche the original lineup is reunited here, with Hawkins returning to the band he quit six years ago for a spell in rehab and once-fired moustachioed thinking man’s favourite Frankie Poullain is reinstated on bass, welcomed back here by Hawkins as one of “my two best mates”. It could be seen as apt that this comes out a year after Radio 2 heavily hyped a comeback album by the equally cheesy Status Quo, but then Quo have never really gone away so it’s not abundantly clear why The Darkness feel the need to step up to the role of Spinal Tap without the jokes with the exact same jokes Christopher Guest et al made in the Eighties.

This isn’t to say that fans of the band (and I guess it comes with the territory of being a novelty hair rock group, but they do seem to have an admirably ardent fan following) will be disappointed with what’s on offer here. The power chord riffs are loud and the faux-gospel harmonies are as over the top and exaggerated as the lyrics about love and rock. Also, like music’s Top Gear presenters, not one member of the fourpiece has yet learnt the difference between their bit of kit and their penis. You remember what The Darkness sounded like nine years ago? That’s what The Darkness sounds like on Hot Cakes; in a way it’s impressive that the only way this band could evolve would be to lapse into self-parody.

So what I’m saying is, the guys appear to have neatly set themselves up to be immune from criticism. Well fuck it.

I guess that these songs are deliberately generic, that it’s a whole genre of music that’s the butt of the joke here, but there’s nothing that really stands out as a hit on here, nothing to get the crowds in Whitesnake t-shirts (ironic or otherwise) moshing in the manner of Permission to Land’s hits. Sure, ‘Everybody Have a Good Time’ and ‘Nothing’s Gonna Stop Us’ might get the crowd going for a bit, but that’s largely down to their single releases, and there’s no way they can sustain a whole album. There’s also a cover of Radiohead’s ‘Street Spirit (Fade Out)’, already a live favourite, ass-fucked into The Darkness’s own style. I love Radiohead, I love ‘Street Spirit’, and some things are sacred to me, so I’ll refrain from comment.

All of the above though is really a step up from the semi-phallic opener ‘Every Inch of You’. Starting with a misleading, self-pitying line about being a loser who just loves rock & roll, things take a turn for the worse when Hawkins informs us that “Every man, woman and child wants to suck my cock”. Now, Justin Hawkins may not be expressing any inappropriate desires here, and I don’t want to imply that he is... but he is saying that, he believes, children want to blow him. I get the joke, I really do, it’s not difficult, he probably doesn’t really think that, but... Justin Hawkins said...

I imagine quoting Morrissey might be missing the point a bit here, but that joke isn’t funny anymore.