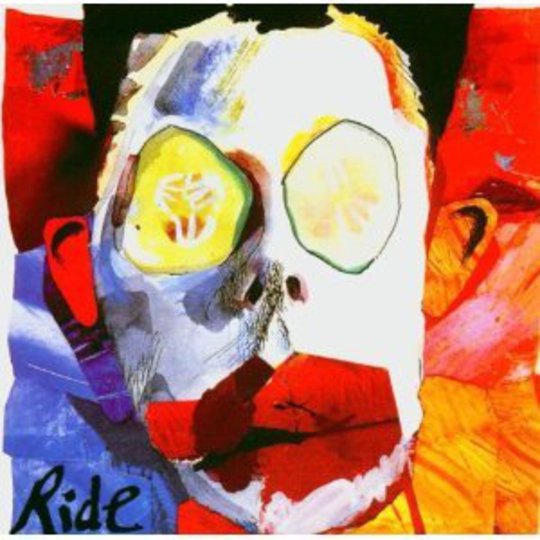 Difficult to believe as it may be, just 20 years ago Ride found themselves sitting pretty in the top tens of both the UK singles and albums chart. While not the most commercially unfriendly band of the day by any stretch of the imagination, their achievements still raised a few eyebrows back then, not to mention a hail of celebratory cheers up and down the land from the indie and underground fraternity. After all, it isn't every day that a guitar heavy mantra clocking in at eight minutes gatecrashes a top ten containing such gems as The Pasadenas and Curtis Stigers that particular week.

Entering the charts as the second highest new entry in the lofty position of number nine just six places behind Michael Jackson's 'Remember The Time' - indeed The Jesus & Mary Chain's 'Reverence' also cracked the final ten that week one place below - 'Leave Them All Behind' has arguably become Ride's signature piece. The moment they left the shoegaze tag behind once and for all.

Eighteen months earlier, the band had released their debut long player, Nowhere, to a fanfare of universal acclaim. Even today still heralded as one of the most inspired records of its generation, most bands would have been daunted at the prospect of following such a near perfect artifact as this. But then Ride never were a band that rested on their laurels. Despite Rob Newman's occasionally humorous send-up sketch on The Mary Whitehouse Experience, their focus and determination could never be faulted. So, less than a year after Nowhere's release, work had already begun on its successor. Whereas Nowhere was borne out of a shared love of My Bloody Valentine, The Jesus & Mary Chain and The House Of Love, Going Blank Again would see a more diverse range of influences enter the melting pot. Recorded towards the back end of 1991 with Alan Moulder, whose previous credits had included the Glider and Tremelo EPs for My Bloody Valentine and the Mary Chain's Automatic long player, Going Blank Again was unleashed in March the following year with both critics and consumers alike falling head over heels for its box of delights.

Comprising ten songs in total, it's a beguiling affair for those like myself previously turned onto Ride's effluent charm by those flawless first four EPs and the innocent beauty cum maelstrom of Nowhere. And yet also compelling, not least in the way every single piece offers something new on each subsequent listen. Take the aforementioned 'Leave Them All Behind' for example, already a firm favourite due to Andy Bell and Mark Gardener's harmonising incandescently over guitars that resemble successive tidal waves crashing against the shore. However, it's the often understated rhythm section of Steve Queralt and Loz Colbert that really come to the fore here, driving the song along at its widescreen core, occasionally traversing into dub territories before Gardener and Bell declare "I don't care about the truth!" in the coda. The term masterpiece is bandied about far too easily nowadays but for eight glorious minutes or so in 1992, this was as close as the UK independent scene ever got to creating its own 'Bohemian Rhapsody'.

And so it continues throughout the record. 'Twisterella' arguably represents Ride's finest three minutes from a pop perspective (although it could be said of the early singles 'Chelsea Girl' and 'Like A Daydream'), while 'Not Fazed' sees the Oxford four-piece reliving their wildest Marquee Moon fantasies. 'Chrome Waves' meanwhile samples Massive Attack's 'Unfinished Sympathy', its string segment and laidback aura owing more to Bristol's burgeoning trip hop collective than the Home Counties so-called scene that celebrates itself Ride were allegedly spawned from. Duelling guitars - check out Bell's mesmeric solo in the final third - and a melody that accentuates yet pre-dates Britpop by a good two years characterises 'Mouse Trap', another stark diversion from what had previously been regarded as the accepted norm with Ride. Indeed it's only on 'Time Of Her Time', situated at Going Blank Again's halfway mark, that Ride come close to the reverb heavy overload of their debut. Influenced by Terry Bickers of The House Of Love while not sounding a million miles away from his 'Destroy The Heart' opus, its place here perhaps a final sign-off to Nowhere's dense soundscapes.

Another sample, this time from Bruce Robinson's 1987 adaptation of 'Withnail & I', introduces 'Cool Your Boots', a reflective, and somewhat sprawling opus that serves as 'Leave Them All Behind''s slightly paralytic younger sibling. 'Making Judy Smile' also doffs its cap towards Britpop, albeit the original Sixties era that started the ball rolling. It's on the dreamy, dub heavy, two-songs-in-one 'Time Machine' where Ride really come into their own. Imagine King Tubby and Kevin Shields sat at the controls while Paul Simon's recording Graceland and you're halfway there. Having already flirted with similar experiments in sound on 1991's Today Forever EP, 'Time Machine' is yet another example of a band at a creative peak they would struggle to repeat again. 'OX4' closes the record in a psychedelic swirl reminiscent of Hawkwind at their In Search Of Space finest, Gardener and Bell both managing to sound errant yet wistful in their delivery.

The album was re-issued with four bonus tracks taken from the 'Leave Them All Behind' and 'Twisterella' singles in 2001, and all four remain for this twentieth anniversary edition too. While 'Going Blank Again' the song didn't make Going Blank Again the album first time round, its symphonic urgency resonates here, particular against 'Howard Hughes's more sombre nature and the plodding if partially incisive 'Stampede', possibly the weakest track of the bunch. The ten-minute instrumental 'Grasshopper' closes the audio element, at the time resembling nothing else on this earth, even though the likes of Godspeed! You Black Emperor would soon be churning out textured pieces of similar magnificence in their sleep.

What radiates through Going Blank Again from start to finish is how the record's never dated badly. If anything, it carries the same amount of succulent vitality when first released, its contents still refreshingly relevant now as then. And then of course there's the bonus DVD, Live At Brixton. Essentially it's a greatest hits set recorded on 27th March 1992 and originally released in VHS format later that same year. It captures Ride at their diligent, if unspectacular best. Highlights from their first four EPs - check out the double whammy of 'Unfamiliar' and 'Like A Daydream' early on in the set - congeal with choice picks from Nowhere (the title track, 'Vapour Trail' and 'Dreams Burn Down' standing out emphatically) and the majority of Going Blank Again, the complicated arrangement of 'Time Machine' unsurprisingly omitted from the live set. As an added incentive to purchase what is already a must-own record anyway, the twentieth anniversary edition of Going Blank Again is an essential addition to anyone's collection. So what are you waiting for..?