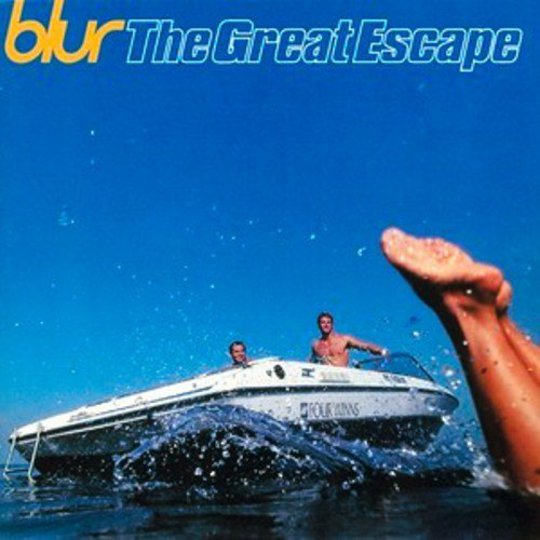 On its 1995 release Blur's The Great Escape was heaped with praise: NME dubbed it a 9/10 'near Masterpiece', Melody Maker implausibly went with 12/10. The monthlies followed in near-universal acclaim and the album entered the charts at number one, with all four of its singles charting in the top ten. A success, clearly, but somewhere along the line the tide turned - accepted wisdom now chalks it up as folly, a dropped ball that made a mockney mockery of its creators. Reality is somewhere in between - away from the Battle-of-Britpop hype on the one hand, and post-Gallagherisation whitewash on the other, The Great Escape reveals itself as flawed, melancholy, occasionally stunning and utterly bonkers.

‘Country House’ pretty much sums it up. At first glance it feels like the nadir of Damon Albarn’s knees-up-Mother-Brown phase: it’s got an unwatchable soft porn video and a brass section nicked from a Madness tribute band. But look closer - there’s the Pink Floydish falsetto “blow, blow me out, I am so sad, I don’t why”, sneaking into the second chorus and staying to the end; then there’s Graham Coxon’s art-rock solo, all fractures and discord, undermining or maybe underpinning the ‘ave-a-bannana-isms. It’s completely ace and quite, quite mad. That’s when Great Escape is at its best - haunted and lonely and a little bit lost beneath the bravado.

This was a record cut amid Blurmania, between winning Brits, chugging champers and selling out the Ally Pally behind the Parklife juggernaut. It’s obvious now how scary and unnatural Coxon and Albarn found the fame game: the album is awash with petulance, paranoia and bratty weirdness. Like Nirvana’s In Utero, another record made in the uncomfortable glare of sudden-onset fame, it opens with an unsettling chordal slash to scare off the teeny boppers, a plan that sadly comes unstuck thanks to unshakeable pop instincts - ‘Stereotypes’ is as hummable as anything in the Blur canon. Despite the tunes, it’s clear all is not well; Albarn’s character studies are queasy and unlikeable. The Britain of Parklife was affectionately caricatured, this one is questioned and mocked. When it works it’s the band’s best ever form: ‘The Universal’s’ dystopian Scott Walkerisms are stunning, and no amount of British Gas adverts are taking that away from us, while ‘Best Days’s isolated sadness is wistful and yearning and brilliant. Elsewhere the cynicism gets the better of the tunes. ‘T.O.P.M.A.N’s clueless wideboys, the titular subject of ‘Mr Robinson and His Quango’ and ‘Charmless Man’s, er, charmless man, are shallow, joyless figures whose sneery feel creeps into the music.

It doesn’t take the anagramic ‘Dan Abnormal’ to see this as thinly veiled autobiography - ‘Yuko & Hiro’, about working lovers who never see each other, was hardly opaque to anyone seeing Albarn and Elastica’s Justine in every tabloid, while the outstanding and beautiful ‘He Thought Of Cars’ declares ”Columbia is in top gear, it shouldn’t snow this time of year”, echoing Albarn’s 1996 ”blizzards of cocaine” comment, despairing as he fought to escape the London scene he’d helped to create.

The themes are echoed on the extras disc, and it’s telling of the low-end of the album that b-sides ‘Tame’, ‘Ultranol’ or the sea-sick, Radioheadish ‘The Man Who Left Himself’ could replace, say, ‘Globe Alone’ or ‘It Could Be You’ on the album-proper with no real drop in average quality. Best of all is ‘To The End (La Comedie)’, a reworking of the Parklife standout with french singer Françoise Hardy which might actually outshine the original in its stirring, gallic charm.

There’s a lot jammed into The Great Escape: oddball sounds that prefigure Blur’s supposed creative rebirth by two years, classic pop hooks now seeped in iciness and cynicism. Stephen Street does an admirable job holding it together, the first time he was to helm a Blur album in its entirety, but he can’t smooth the planes and angles required to make the whole thing fit. I doubt anyone could. It’s an unsatisfying entry in the Blur catalogue, but possibly the most interesting. Ultimately it’s one that shouldn’t be overlooked.