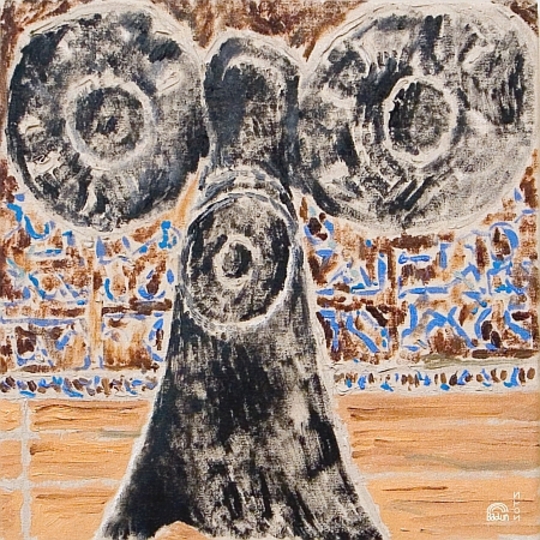 It’s unclear who, but someone out there must write the music played in TV 'drugs vision' sequences. It’s the music heard when an actor foolishly smokes an acid, and the world goes into door viewer angles and strangers all have devil eyes, swirly and cackling. Danish duo Badun don’t just sound they like write this stuff - they talk in it, a note on their Facebook declaring 'the music is somewhere in between abstract digital sound design, non-repetitive electronica, IDM and the free spirit of Seventies’ fusion jazz/krautrock'. So if you ever need to eject the pot-heads from your living room, put on this fidgety freak-out and watch them run for the hills.

s.o.t.s., Badun’s third LP, has a mean and industrial feel to it, and for the most part mimics the noises your phone might make if you accidentally dial a fax. Somewhere between complicated and intricate, their dark babbling sounds like Burial with fleas, with ‘I Can Not Remember My Funk School’ ticking and hissing for five inutes. These are ghost-in-the-machine tunes, or gremlins in the BBC Radiophonic Workshop: the beat behind the crashed computers of ‘Kætø’ is so fuzzy it lisps, while ‘Glry Studio (V. Japan)’ and its creaking wreckage seem to have been produced live on Hashima Island. Not since the golden years of the Third Eye Foundation has someone released music this synthetic and demented.

Unfortunately, the searching for more mania has a snag, because unless you’re truly out of it s.o.t.s. is just too brain-melting to take in. It’s also oddly dated: 20 years ago, madcap IDM like this would have got Aphex Twin seething; today, it feels like a very late arrival, about as logical or relevant as Rocky Balboa. The gurgled voices on ‘Six Months Later in a Bash’ make a change from the agitated uninterrupted blips, and ‘Fradig James’ drops a footwork beat into its horror movie noises, but otherwise s.o.t.s. is a 40-minute slog; percussive and flecked with peripheral menace. The drugs have kicked in now, the Clangers are on TV and there’s no hope of finding the remote.

Though it may be hard to swallow, s.o.t.s. has an appeal, in that no-one out there is writing music like Badun. Their beats are fast and irregular, the melodies barely glimpsed, and if you’re the type of person who stares at Jackon Pollock’s drip painting there’s no reason why you can’t enjoy this. But what made Badun’s sound unique in the past - its underlying innocence - is something s.o.t.s. has forgotten. There’s a light at the end, ‘Rebef Boj’, a John Carpenter soundtrack with eerie synths/conventional beats, but otherwise this album is a strange experience, like overtaking music instead of listening to it.