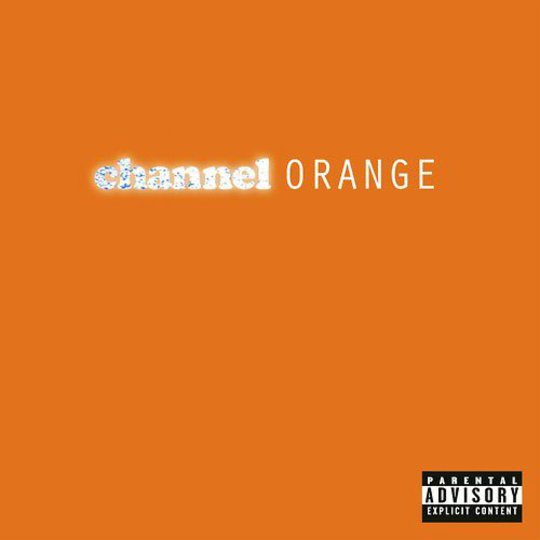 channel ORANGE speaks to and about identity: specifically, how one reconciles a burgeoning individual identity with the overarching, occasionally oppressive groupthink of one's roots. It’s about what it is to belong to a culture still defined, however subtly, by its own code of 'being a man' and all that entails. 'Pyramids' finds Ocean musing that "when you say my name/It makes me feel like I'm that nigger/Though I'm still unemployed", feeling for a moment slightly less a failed man because his girl's had to resort to stripping to make ends meet. It's sex as ego boost, and an ultimately futile one at that. It's the elation and misery of two people for whom trying to make their way in the world, while adhering to society's expectations, will lead to mutual resentment.

Which leads us to The Joy of Pronouns. When an album opens with "My eyes don't shed tears/But boy, they pour/When I'm thinkin' 'bout you" and closes with 'Forrest Gump's admissions that “you’re running on my mind boy" and "You're so buff and so strong", sexuality clearly is an integral part of the story. Women receive affection, respect, but also represent a relatively empty sexual gratification. The lone man, however, is spoken about in terms of longing, desire, confusion; all those things that make unrequited love so exhilarating and devastating. It's another part of Ocean's quest to become a man his mum can be proud of; in the context of environment, and against someone clearly not able to acknowledge the same, it's another obstacle. But it is only a part of that journey, not the whole of it. And often the biggest obstacles to personal realisation are those too subtle, and far too deep-rooted, for one person to deal with.

America's economic fault lines are touched upon in 'Super Rich Kids': Ocean mocks the attitude that "we'll both be high the help don't stare/They'll just walk by they must not care", the trust-fund babies not understanding that if 'the help' actually did care they'd face the boot. The picture Ocean paints of the pop-culture obsessed upper-middle classes is recognisable to all: the iPhone text alert, video games blaring away, 'Lost' quoting Fear and Loathing in Las Vegas’s infamous "Too weird to live, too rare to die" to highlight one's literary cred. It's the required aspirational lifestyle, demanding all too many personal compromises just to keep one's head afloat. Which makes the subtle prodding of the culture - and, yes, occasional love songs directed at men - feel all the more thrillingly subversive.

Where channel ORANGE goes beyond mere subversion - or, perhaps worse, therapy - is in its execution. By starting at the story's end, taking a trip down memory lane leading to an evocative, rain-soaked loose end of an outro, the structure is more like a novel than the random jumble of radio-friendly bite-size nuggets so many albums are now made of. Not that any of these songs would struggle to become major hits, with the likes of 'Thinkin' 'Bout You', 'Pilot Jones' and 'Bad Religion' owning several of the year's catchiest melodies, referencing everything from Jimi Hendrix to Motown via just a smidgen of Blade Runner. It's musical storytelling in its purest form, demanding several listens and uncovering itself as perhaps one of the more individual takes on the great American dream.

Admittedly a straight white girl from East Anglia is likely to have precisely sod all personal experience of the cultural complexities driving channel ORANGE. But everyone (and certainly the aforementioned pasty girl) understands ‘Bad Religion’s despair that “I can never make him love me”, the need to come to terms with one's personal truth in the face of everyone screaming the opposite, are universal. channel ORANGE is Frank Ocean's elegaic, occasionally rough-and-tumble but beautiful coming of age story. Beyond genre lines, racial lines, sexuality lines, any lines you can think of, it's that all-too-rare gem: a universal story you'll come back to long after the hype's been and gone.