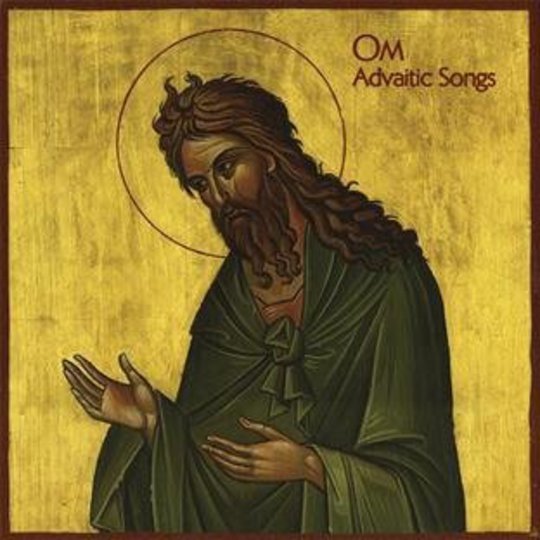 Living in an increasingly secular society has many advantages (we’ve more freedom to live how we want and love who we want without worrying about incurring the wrath of the Invisible Policeman in the Sky) but it also has some drawbacks. Two of the things that you lose when you live in a godless world are the sense of ritual (the bells and smells of the Catholic mass or its equivalent) and a sense of deeper or transcendental meaning. These are exactly the sorts of things that OM’s new record, Advaitic Songs, will try to give back to you. Everything from the Christian iconography on the cover, to the richly intoned lyrics, “At Lebanon, priest ascending”, to the intangible sense of worship and ritual dripping from every rolling bassline is explicitly designed to awaken a sense of something higher in even the most spiritually impoverished listener.

Which is not to say, of course, that this is a Christian Rock record, or anything of the sort. OM plunder Abrahamic and Dharmic imagery, Eastern Mysticism and Biblical texts in their quest to bring the sense of awe to the listener. Advaitic Songs doesn’t preach a particular faith to you; it merely asks you to consider the concept of faith itself. None of this will be new to you if you’re already a fan of OM but what might surprise you though is the sheer scale and scope of Advaitic Songs. Everything from the superbly produced recording of the female chants that open the record to the weeping cello riffs of ‘Siani’ speaks of a record full of ambition and ideas. In many ways this could be 2012’s big crossover metal record with the potential to do exactly what Sunn O)))’s Monoliths and Dimensions achieved in 2009: pulling in listeners who would not normally touch a ‘metal’ album and showcasing the potential for innovation and excitement in a genre that can be all too easily dismissed.

There could in fact be even more potential for crossover appeal in Advaitic Songs, the barrier to entry is lower than with Sunn O))): without Atilla Csihar’s demonic tones or anything of the crushing weight of the drone doom guitars, there is less to put off a casual listener in OM’s latest. What might put you off potentially are the vocals: Al Cisneros’ half-sung, half-spoken chants do unquestionably fit with the meditative devotional soundworld the record creates, but their mostly unchanging nature may start to grate.

Whether there’s enough ‘actual metal’ on this record for it to even count as a metal album at all is a moot point. For the most part the duo’s hypnotic repetitive bass grooves and lightly tapped drum loops sound a long way from what most people would associate with the genre and as often as not they allow spaces for extra instrumentation of exceptional delicacy, such as the Spanish guitar trills on ‘Haqq al-Yaquin’, to come to the fore. It’s only really on ‘State of Non-Return’ that Cisneros’ bass fuzzes out and the tempo reaches anything approaching conventional metal. Even here though there is remarkable control and restraint: everything is pulled back into an endlessly circling mantra and the meditative pace is re-established.

Advaitic Songs shares a lot of the same strengths as the recent output by Earth - every listen unfolds another texture, another line gets embedded in the brain. If you’re unsure if this is the band for you then have a listen to ‘Gethsemane’, the 10 minute track that forms the centre of the album: you’ll hear exactly the kind of extended meditation on ritual and religion that you might expect from a band that once played for five hours straight in Jerusalem. It won’t covert you to belief in God - that’s not really the point - but it might well make you a firm believer in OM themselves.