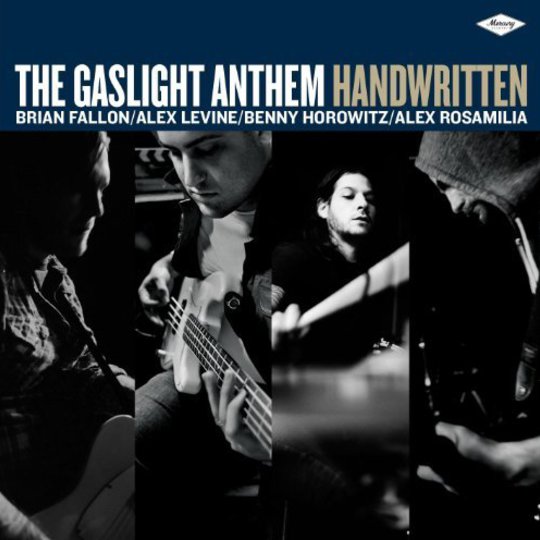 You don’t get bands like The Gaslight Anthem any more. Bands who follow in the great tradition of Bruce Springsteen, Tom Petty and The Ramones by writing one great song and then re-writing it until they or everyone else gets bored of hearing the damned thing. This New Jersey four piece particularly relish in imitating the footsteps of their idols because their ‘59 Sound’ is basically The Boss minus his E Street Band.

If Brian Fallon and his motley crew were Kings Of Leon massive by now, there’d undoubtedly be more of a pressure to abandon what has served them well so far. That is to say, hokey American imagery of rundown Cadillacs and small town girls baptised in all the fire that can be roused from two six strings, a bass guitar and one booming drum kit. As things stand, Handwritten is the band’s first album on a major - Mercury Records - so the trick hasn’t quite worn thin.

In imitable Gaslight-style, Handwritten kicks off with lead single ‘45’ - its best and most formulaic moment. “Hey, hey, turn the record over, her, hey, I’ll see you on the flip side,” bellows Fallon in a couplet that marries his twin passions of reminiscing over old flames and simpler times. This devout faith in the past is ripe for ridicule, especially when what’s heralded from the frontman’s altar of authenticity is simply the product of a humble biro (or fountain pen if you’re feeling fancy). As long as sincerity still counts for something and melody remains king, we’ll let these qualms lie and lap up a record that’s chock-a-block with comfort food choruses.

The Gaslight Anthem are masters of the euphoric singalong where a twinge of romanticism collides with as fewer syllables as possible. There’s “Oh sha la la, listen honey here comes my man” from ‘Here Comes My Man’, “I would just die if you ever took your love away” as roared in ‘Mulholland Drive’ and ‘Howl’s “ey ey eeeey ey ey” - my personal favourite. They’re real feel good moments to restore a hungry heart back to its full chest-pumping vigour.

If The Gaslight Anthem are to conjure up their own Born In The USA, they’ll need to muddy themselves in a quagmire that lies beyond Route 66. Only ‘Biloxi Parish’ spares its downtrodden damsel a Hollywood ending and, even then, the character herself is lifted straight out of an interstate diner. “Who else can take all your blood and your curses? Nobody I’ve seen you hanging around,” bellows a refreshingly vulnerable Fallon from his barstool in the Last Chance Saloon.

With four albums in the can, The Gaslight Anthem hardly seem the types to change their tune. Rousing themselves to rock’s high table requires breaking the mould they so desperately seek to emulate and what’s the point in that when you’re content to wash the feet of your heroes?