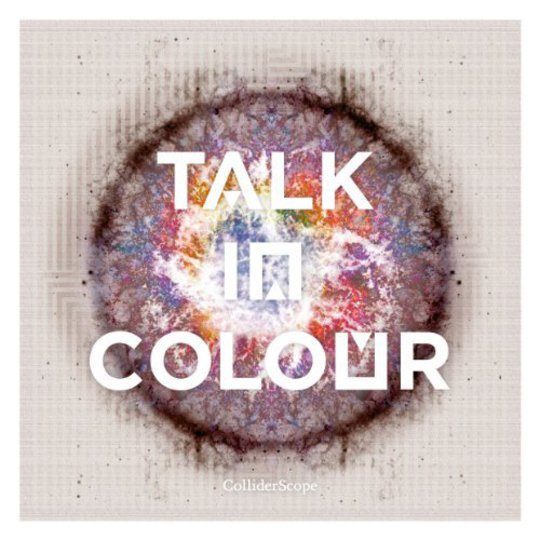 It's a funny thing, time. Some days it seems endless and slow-running, in others crushingly finite, and gone before you can say knife. But the guarantee is, until you hear it for certain to the opposite, it passes. And with that passing go fashion and trends. You could say that there's nothing new under the sun, the snake eats its own tail but they amount to the same thing. If you stand still and observe for long enough, sure enough, you'll see recurring trends. Colliderscope would sit neatly between Sneaker Pimps and Bjork records, and feels singularly out of time, as though it's been snatched from 1998. But that isn't such a bad thing.

Because despite that lazy pidgeonholing, Talk In Colour play a kind of music that is actually very hard to label without context, so I'm going to suggest who this album will appeal to and work backwards from there. Truck drivers, taxi drivers. Students trying to cram the last piece of information into their brain before the lights go out. People with mid-range stereo equipment and polished hardwood furniture. The truckers and the taxi drivers will love it for the depth of the mix, live drums and sequenced rhythms combining to stay just under the level of conscious awareness they need to be awake. They'll find themselves tapping the off beat on the steering wheel until the lights change. That same low level approach will find favour with worker bees in the night, not-too-interruptive keyboard lines blending in with emergent thought patterns. Those with the nicer hi-fi set ups will appreciate the production job, which is as faultless as this reviewer has heard for some years.

You could say it was perhaps too clean, but this isn't an album where any instrument is ever left in the red. It is a Zen garden, crisp five pound note, cut grass version of sound; the harp of Kat Arney floats gently throughout, and Mary Erskine's voice is pure and plaintive. The best moment comes early on, with the single 'Rocking Horse'. The song has a rich and mesmeric quality to it, and epitomises the idea of balance that the rest of the album expounds but never quite reaches. Here there is genuine tension and release. Later 'Headlights' repeats the same trick, and is no less enjoyable for it. But Colliderscope suffers when the band drop out of high gear. The colours and textures no longer smash together, instead they just smoothly blur in and out of focus....

And then drift down, on to the coffee table in slow motion. Yet more stereotypes come to mind. Advertising executives, and editors of channel idents have warm fuzzy dreams about this kind of sound. Fifteen years ago, this stuff sold by the truck load. The audiences have moved on, grown up. They own nice furniture, have picked cars with good resale value. The grit-free fluidity on offer here could serve up so many other treats, a blank canvas on which any product could reside. And there's the rub. For two songs, everything works, and nothing could rest easy on them. For two songs time seems neither fast nor slow, and when Talk In Colour do that with their music, they're surely on to something. When they don't, they're somewhere in the background, and that seems a shame.