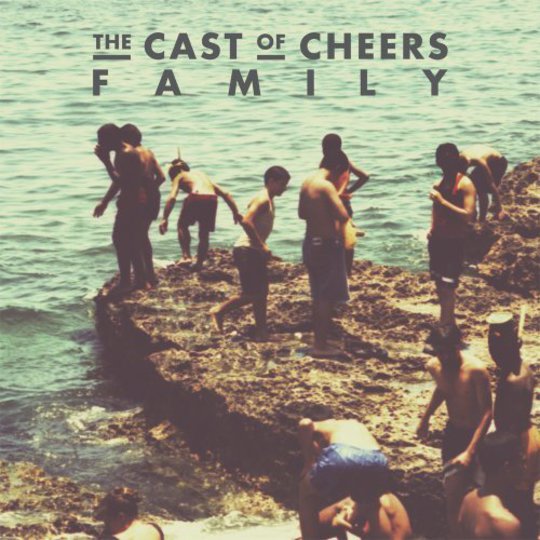 Back in 2010, when we were awash with chillwave’s lackluster trickle, how refreshing it was to have a band like The Cast of Cheers. Formed from the ashes of ABAM, the Irish four-piece’s debut Chariot smashed through the haze at breakneck force with its Foals/Battles-indebted blend of ferocious math-rock.

With their contemporaries losing themselves in a fug of blissed out dreaminess, the LP ensured a quick rise for these four lads from Dublin. Previously available to download free – label restraints have removed all online copies - they recorded Chariot in three days before playing any live shows.

Now signed to a label, the band’s second album Family is the result of weeks in the studio whittling 25 tracks down to ten, and whilst it does retain elements of its predecessor, the album is also tougher and meatier. Describing the album, vocalist Conor Adams said: “Family still feels like a debut. Produced in Hackney by Clor’s Luke Smith (who also produced Foals’ Total Life Forever), Family bites harder than a rabid Rottweiler. Case in point being ‘Goose’ – the only track recycled from Chariot. It’s a brasher beast with thumping looped samples so hard-hitting it feels like you’ve gone several rounds with Mike Tyson. Elsewhere, the title track shudders frantically with brittle guitars and Adams’ Foals-ish howl. Go further on and ‘Human Elevator’s thick chorus wonks with a malignancy that wouldn’t fail to do Battles proud.

There’s plenty of viciousness lyrically too. The bounce-along repetition of ‘Trucks at Night’, for example, attacks faith (“Woke up in the western world as a western child and I can’t find God”) with as much malevolence as A Weekend in the City-era Bloc Party. Comparisons to that band don’t stop there either - on the frantic ‘Posè Mit’ Adams does his best Kele Okereke impression as he cries: “I thought we could talk about anything of any nature / But apparently you take offence to my poor nature.”

However, the band hasn’t just beefed up their sound. For all the heavy loops and schizophrenic samples, there’s enough restraint to prevent overindulgence.

There’s the hip-shaking afrobeat of ‘Marso Sava’ where Adams’ vocals are backed by squawking, Vampire Weekend-like harmonies and that’s preceded by the slow burning build up of ‘Palace and Run’, which will easily become the band’s live anthem.

The only minor niggle is that closing track ‘They Call it a Race’ trudges at a crawling pace sans the catchiness of preceding tracks. Despite that, the (mostly) astoundingly energetic Family is further justification of this band's fast rise and an album The Cast of Cheers can be proud of.