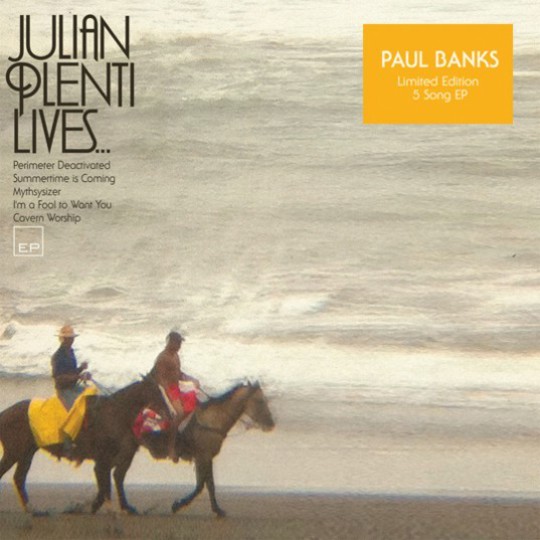 With no new Interpol material on the horizon following 2010's fair-to-middling self-titled long player, not all of the band's three remaining full-time members have let the grass grow under their feet. While guitarist and songwriter Daniel Kessler has kept something of a low profile since the band completed their world tour last tour, both drummer Sam Fogarino and fellow songwriter, guitar player and vocalist Paul Banks have been busy embarking on other projects. In the case of the former, composing soundtracks for a performing arts organisation, while Banks, already an established solo artist courtesy of 2009's alter ego statement Julian Plenti Is... Skyscraper, has been busy putting together a follow-up of sorts.

Recorded earlier this year, Julian Plenti Lives... consists of five songs - two original compositions and three cover versions - that never really give much away regarding its creator's psyche, or any direction he and his band may partake in the future. Indeed three of the five pieces are instrumentals, the opening 'Perimeter Deactivated' reinterpreting Harold 'Axel F' Faltermeyer's memorable opening score segment from Arnold Schwarzenegger's 1987 flick The Running Man Although sticking to the original's racy symphonic orchestration, Banks' version clocks in at one minute and 15 seconds shorter.

'Mythsysizer', taken from J Dilla's posthumous album Jay Stay Paid, released three years after his death, takes on a more ambient approach than the original's concoction of mashed vocal segments and quadrophonic beats. Perhaps viewed by some as an odd choice, and certainly a million miles from Banks' work with Interpol, but to anyone present at the band's Heaven show in London two years ago, the soundtrack of old school rap and breakbeat that preceded their arrival on stage perhaps highlights at least one member's love of hip hop.

Banks' take on Frank Sinatra's 'I'm A Fool To Want You', a song written for Sinatra's then-wife Ava Gardner and since covered by the likes of Billie Holliday, Linda Ronstadt and Tom Jones, doesn't veer too far away from its comfort zone as such. Instead there's the feeling its shimmering, layered underbelly could have been coerced by Massive Attack or Groove Armada, such is the genteel way processed beats and intricately smooth keys wash over Banks' delectable croon.

Arguably the standout moment here and possibly the clearest indication of what Banks' forthcoming album - set to drop in the autumn - will sound like is the kaleidoscope two-songs-in-one 'Summertime Is Coming'. Although the first half isn't too far removed from later Interpol material like 'Summer Well' or 'Memory Serves', it's during the final two minutes that Banks takes a stark diversion into previously unchartered territories. "Is this the right time to know me?" he asks while a 'Losing My Religion'-esque mandolin interlude provides poignant accompaniment. There's even a hint of Josh T Pearson/Jason Pierce otherworldliness in the lyric "Can we waste some more time just colliding in space?" that greets the song's finale. Bittersweet yet resounding, it represents one of the most audacious pieces of music Paul Banks has put his name to in recent years.

As the classically inspired instrumental 'Cavern Worship' brings Julian Plenti Lives... to a close - all shuffling pianos and dense, cavernous drumbeats - we're still no closer to discovering what really makes Paul Banks tick. Nevertheless, if this EP is anything to go by, it sure as hell could be an interesting, and thoroughly unpredictable voyage.