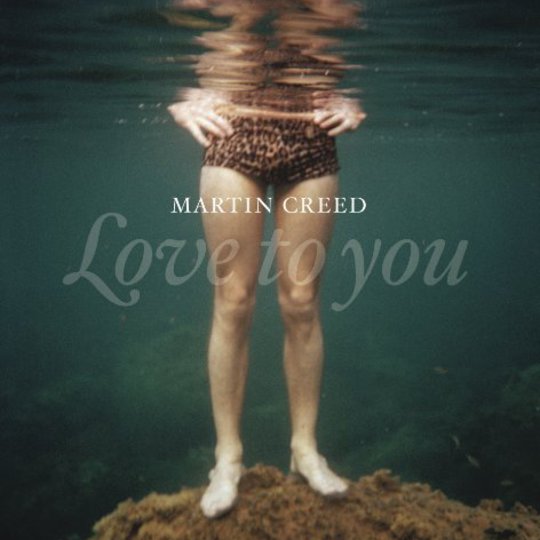 While probably better known for his controversial Turner Prize-winning piece Work No. 227: the lights going on and off, Martin Creed has been making music for a while now. At the end of the Nineties he released an album with the band Owada, with more material coming under his own name in 2000. Sound has also been a regular feature in his art, from the appearance of metronomes and doorbells, through to a 70-minute production that featured endless repetitions of the five basic positions of ballet, with a soundtrack including ‘What’s the Point’, a song featured on Love to Youand one of the album’s highlights. The experimental approach seen in Creed’s artistic work has clearly informed this first full length as Martin Creed and band; rather than approaching music as an artist looking to start or be involved in a band in the conventional sense, Creed has produced a selection of songs in the vein of an experimental artist approaching a new medium. Art rock, quite literally, you might say.

With that MO in mind, Love to You doesn’t disappoint; an intriguing combination of both the conventional and experimental, across its 18 tracks (coming in at under 40 minutes) any standardised interpretation of structure is largely abandoned in favour of a sequence of lo-fi, post-punk vignettes loosely based around the themes of love and hate. Structural experimentalism extends beyond the somewhat prosaic abandonment of verse/chorus/verse chorus or deployment of unusual time signatures too; ‘Alphabet’ sees the fricative sounds of individual letters and words given full attention, whilst the lyrics of ‘Words’ consist entirely of the repetition of the word ‘words’, questioning the use of, or even need for, conventional lyrics. ‘Be Natural’ takes yet another angle, combining a similar type of semantic self-examination with the use of musical terminology (lyrics including “B natural, B sharp”).

If all this sounds wilfully obscure that’s because a lot of it probably is. ‘Fuck Off’ definitely is. But that’s not to say Love to You is the musical equivalent of a light turning on and off (although repetition and extremes are clearly evident here). What makes the record accessible, intriguing and engaging is that all experimentalism is framed by a clear eye for a catchy tune. While conventional structures are abandoned every song hangs together well, a remarkable achievement for an artist whose musical approach is to aim for a combination of 50 per cent silence and 50 per cent sound. Instrumentally it also plays a very safe hand; you’re rarely taken anywhere populated by anything more exotic than a clean guitar, drums, bass and vocals. Creed’s Glaswegian accent and some twee female harmonies also bring to mind The Mouldy Peaches, The Vaselines or The Wave Pictures, a useful context anchoring the more experimental moments to something more familiar. For those in need of some more serious respite, the title track and ‘You’re the One for Me’ also offer up something approaching simple love songs.

Musicians turning their hands to art are ten a penny these days, so to have someone approaching it from the other direction is a welcome change. Creed’s unfettered approach of ignoring the standard constraints one would normally ascribe to rock music has also led to something sufficiently different to be of note, and sufficiently well-executed to be worthwhile. Simple, playful and exciting, it’s also a lot of fun live, and in all likelihood more palatable than his impending Olympic work All the Bells; brace yourself as all the bells in the country are set to be rung as loudly and quickly as possible for three minutes to celebrate the first day of the 2012 festivities...