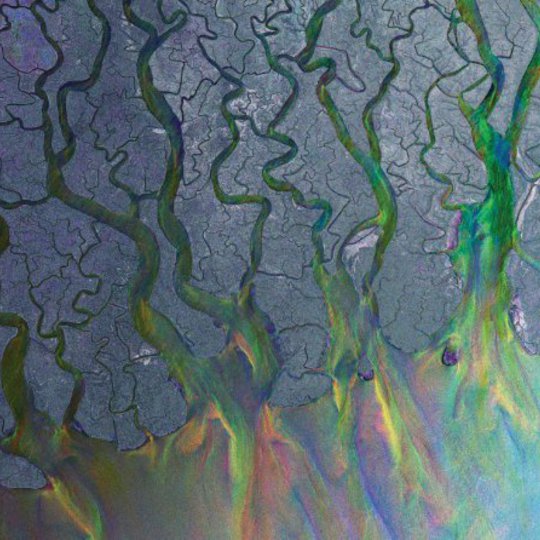 There’s been a lot said about alt-j, those Mac-generated triangles, and most of it has been a struggle pit their sound to a genre. The band has given a helping hand by offering up a couple of labels, should you feel comfortable using them: ‘jump-folk’ or ‘trip-folk’, but if you find the labelling process a bit of a waste of time, best just to give them a listen.

Most likely you will have first heard alt-j on the radio with their overplayed single ‘Matilda’, whose chorus quotes the climactic scene from Luc Besson’s brilliant Leon. This is perhaps the least inspiring song on the album, although it sets the scene for the filmic-theme that runs throughout An Awesome Wave. The opening track, ‘Intro’, offers an instrumental piano swell into the surreal a capella of ‘(Ripe & Ruin)’. A precedent is set here for brilliantly bizarre lyrics, such as “She only ever walks to count her steps. Eighteen strides and she stops…” and alt-j somehow manage not to disappoint lyrically for the next 11 tracks. That is, if you don’t mind that some of the most striking lines, found in ‘Breezeblocks’, are actually borrowed from the esteemed Maurice Sendak.

In fact, there is little to find disappointing about An Awesome Wave. Each new song builds on the last, spiralling off on a new path, testing, experimenting, returning again to familiar ground. And frontman Joe Newman’s voice adds a sprinkling of magical glue to whole, his voice quirkily hypnotic. Most of the tracks could be said to count as standouts - even the three interludes that serve to lull the music back down to a calm like the retreat in the wake of a breaking wave. However, a special mention should go to ‘Fitzpleasure’ for the brilliant vocal and instrumental layering and dirty bass line that skip the line between dance and pop and something altogether more obscure. Because for alt-j, it is all about nuances and detail, it is about building melody up only to tear it back down to the roots.

And it is all about the sea. The album title, a lyric taken from ‘Bloodflood’, is not the only mention of the oceans, but it is the tidal ebb and flow of this album that brings it so vividly to life. It is in the beautiful nonchalance of ‘Tesselate’, the driving progression of intensity in ‘Breezeblocks’, the background sounds of the sea in ‘(Guitar)’. Oh wait, that might actually be traffic sounds. It’s hard to say.

Whatever alt-j were aiming for with their debut album, they have managed to prove their value as talented musicians, literary enthusiasts and imagery aficionados. There are just enough love songs in there to keep it rock, just enough instrumentals to edge it back towards the cinematic, and more than the usual helping of skill to smooth off the edges and end up with a beautifully rounded, awesome debut album.