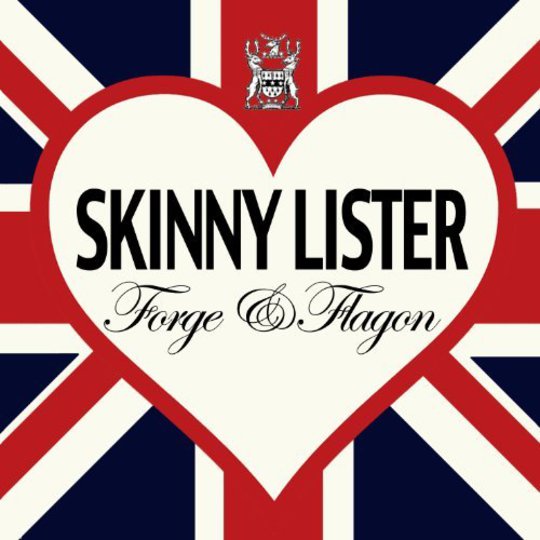 We’ve been told that it’s a good year for being proud of our Englishness, and what better to help us on our way than to listen to a dose of wholesome, hearty, quintessential English folk music?

Skinny Lister are just that, and did additionally well in releasing their debut album in time for the onset of summer; for Forge & Flagon is the digitalised version of a sunny day with an ale to hand. The band has been given many a label since forming in 2009, from ‘the Pogues with good teeth’, through to ‘hardest working band in Britain in 2011’, and neither accolade has been earned lightly. These pearly-gnashered guys and gal have been spewing out uplifting folk with relentless enthusiasm at every festival that would have them, mostly on land but with a narrowboat canal tour thrown in for good measure.

And now they’ve released their first album with Bat for Lashes engineer David Wrench. There are two sides to Forge & Flagon; the two voices of Skinny Lister, entwined together at times charmingly, at times less so. The first is the foot-stamping accordion squeeze of sea shanties and buoyant farmer-folk that make up the likes of ‘If the Gaff Don’t Let Us Down’, ‘Trawlerman’, and ‘Forty Pound Wedding’. These are simple fare, stirring modern day folk, but erring towards the uninspired; too much of these style in a row and the sentiment becomes bland. But Skinny Lister is a touring band, gathering infamy for their enthused, rabble rousing performances. There’s no doubt that these songs can more than hold their own at festivals and the upstairs rooms at pubs, but how many listens they can take in album form is debatable.

On the other side, there is the more restrained, melodic Skinny Lister. The wistful air of ‘Peregrine Fly’ captures Lorna Thomas’s vocals at their best, a satisfying contrast to the boys’ strident singing of earlier songs. Equally, ‘Kite Song’ contains a musical maturity that could have been better developed in some of the other tracks. It is saturated with acoustic guitar lines in careful balance with the layered strains of violin and banjo. It is a delicate yet memorable song. Also noteworthy is the instrumental interplay in tracks such as album closers ‘Plough and Orion’ and ‘Colours’, which evoke the warmth of summers spent sitting on hay bales watching the sun set.

On balance then, this looks set to be a divider of an album. If you didn’t take too well to the spiralling fame of Mumford and Sons then this may well not be for you. But, if you like your folk sprinkled with a dash of fun then look no further; in these songs you will meet the kind of band who sell bric-a-brac on their merchandise stall, produce and direct their own videos (known to include anything from Landrover maypole dancing to By-Plane wing walking), have a troupe of dancing girls to get even the most reticent crowd dancing, and definitely aren’t afraid of sharing their booze. If this sounds like your brand of fun then it may be time to get involved.