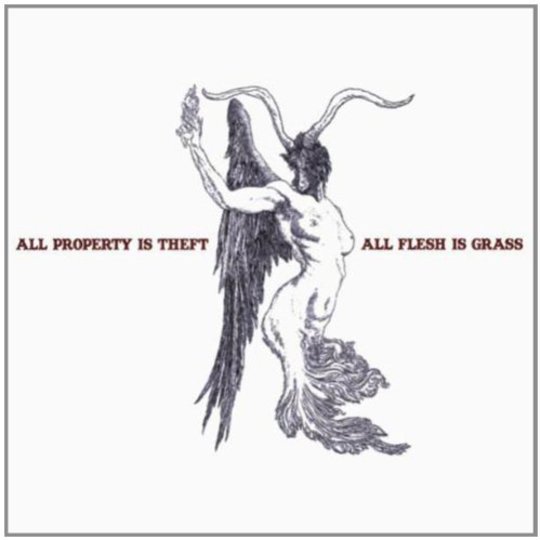 This is the first album proper from David Lazonby’s Geese project, and it comes highly recommended to readers who like their bedroom psychedelia marinaded in bitter Leeds lemon before it is fried. Lazonby, your parents will remember, was the mangled knot of synapses behind briefly-fêted Nineties geekshow Lazer Boy, who exited stage left after their far superior second album failed to find a release anywhere but Japan but left behind a body of work that stands up rather better today than those of most of their backward-looking contemporaries. He’s back, and this time it’s personal.

Personal and political: the divide on the Geese record is as artificial and permeable as the ones you get in real life, if that’s something separable from pop music, but broadly speaking the songs that make up the All Property Is Theft side face outwards to the material world – which, this being Lazonby, is found to be permanently teetering on the brink of kitchen-sink apocalypse – while All Flesh is Grass considers our webs of relationship: friends, family, lovers, past, present, future. Connecting them is a thin, frayed thread marked “transience”. Property moves from snapshots of the psychotic scramble for Stuff (“We’re a nation of Batmen / Driving fucking Batmobiles” is Lazonby’s cute take on fourbyfourism to their idiosyncratic version of Mary Gauthier’s ‘Can’t Find The Way’, the upshot of which is that Stuff might all be gone in an instant; while Grass lays out a paradox of the human condition: change is loss and loss is a kind of death, but stasis is a kind of death too, so how to choose?

Lazonby doesn’t offer any answers, you’ll be surprised to hear, and the faint but pungent vapours of bewilderment and disgust carried by his reedy, acidic voice are unlikely to win him any friends on daytime radio. But don’t come away with the impression that Geese have turned in a wrist-slitter here. The lyrical playfulness I’ve hinted at is complemented by a musical richness, not only in the abundance of hook-and-eyes but in the restless array of instrumentation deployed. Ramshackle bandtronica à la Levitate-era Fall? Check. Early Seventies Bowie side-closer epic set to Mogadon swingbeat? Check. Oh, and would Madam prefer the latter served with a one-note guitar/clarinet garnish so flavoursome it causes her fillings to tingle? Was gonna do that anyway. Tracked-up cat’s cradle of scritchy-scratchy steel-strung acoustics? De nada, boss mate.. Et petercetera.

If you were ever going to like it, you’ll like it by now, I’m venturing. One for those who’ll take a Fried over a Saint Julian, a Robyn Hitchcock over a ‘Walking On Sunshine’, a Kevin Hewick over a Durutti Column, a van der Graaf over a Crimson, A Saucerful Of Secrets over A Momentary Lapse Of Reason, an Ultrasound over an Embrace. An act that calls its label Vanity Case is clearly under no illusion that it will find itself on the Mercury shortlist at any time in the near future, but All Property Is Theft; All Flesh Is Grass is more than qualified to nose its way into the secret history of the margins of Anglo-eccentric pop in the aftermath of the old paradigm having gone tits up.