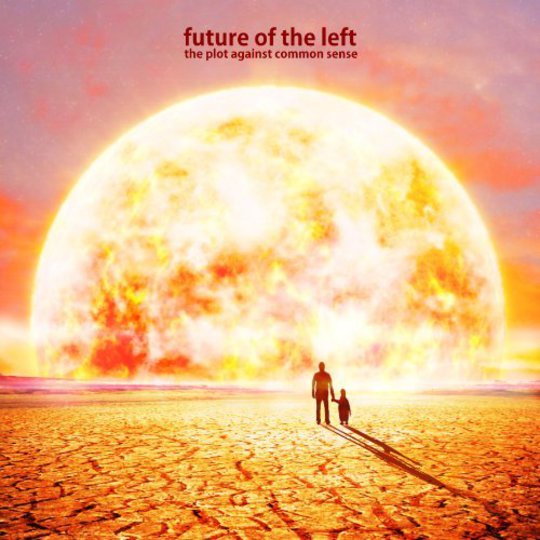 Don't fuck this up, Future of the Left.

It's your own fault, really. You set yourself a damn high watermark with 2009's Travels With Myself and Another: escaping from under the shadow of Mclusky and establishing yourselves as a band of equal if not higher stature than your much-lauded precursor.

And then you had to go and change things. Exit one bassist, enter another of fine vintage and add a second guitarist. Early demos and EP Polymers are Forever indicated – what? A more textured racket, yes, but also a move away from the resoundingly non-commercial sound of yore to a more conventional four-piece rock set up? Is this your main man Andrew Falkous's lunge for the mainstream, a career choice by a critically acclaimed musician and lyricist who still holds down temp jobs when he's not 'active' with Future of the Left? It certainly seems there's a lot riding on this album personally, judging by Falco's furious and hilarious riposte to Pitchfork's review of this album just a few days ago. Expectations are high.

And fuck me, not only does The Plot Against Common Sense reach and exceed those expectations, it only goes blows them out of the water. Into the sky. To the moon. And beyond... This is everything a Future of the Left album should be. And here is why.

Exhibit 1: Lyrics, Vocals and Other Utterances

Falco's verbal dexterity is already well-regarded. He's evidently a man with a love of words, of the rhythm and rhyme, and his ability to turn a wicked phrase is second to none. Still, his lyrics have largely restricted themselves to stream-of-consciousness surrealism, bizarre characters and vaguely hinted-at meaning, with the bulk of his coscial commetary restricted to blogs, Twitter and breaks between songs at live sets.

Common Sense sees him spread his tattered, bat-like wings and soar. As highlighted by Falco himself, major chunks of the wordage on this record are the fruit of attempts to write songs 'actually about things' – which results in some of the funniest and most powerful songs on the record. 'Failed Olympic Bid' – masterstroke. 'Sorry Dad, I Was Late For the Riots' – funny and bittersweet. 'Robocop 4: Fuck Off Robocop' – well, more on that later. Add in around these nods towards celebrity culture, lads on football weekends, advice on how to look young, the thin line between civilisation and barbarity... this is a misanthropic, outraged and often hilarious skewering of the early twenty-first century and its fascinations.

Don't think - not even for a second - that it's at all earnest, though: Future of the Left have not become some trite and uptight protest band overnight. You've got the familiar repetition of mantra-like phrases – “No / Way / You'll never find peace / Never find peace / With the name they gave you” on 'Beneath the Waves, an Ocean – and unreliable narrators – 'Anchor' seems to me to be a spiritual if not actual sequel to 'Chin Music' on Travels..., wherein the punchy protagonist is more of a functional alcoholic than a raging drunk. This all complements nonsense noises and stream-of-consciousness battiness – Camp Cappucino is a highlight –which keeps revealing new angles listen after listen. There's plenty of scope for sub-A Level textual analysis, don't you worry.

Much analysis of Future of the Left concentrates on Falco. However, he's not the be-all and end-all – there are others in the band too. Admittedly, three becoming four was a risky move. Both Future of the Left and Mclusky turned the restrictions of the three-piece into a major strength, with the resulting minimalism making both bands doubly distinctive (Please Note: This Is Not a Maths Test). Becoming a more traditional four-piece changes the chemistry. Thankfully, rather than eliminating that uniqueness, adding members has mutated it yet further. The newbies bring their own styles to the plate: so, rather than Kelson's bludgeoning bass riffs, you've got a rolling, throbbing style with Ruzicka, particularly on 'Beneath the Waves, an Ocean', whereas Watkins' extra guitar adds an almost proggy overtone at points, giving texture where before there would simply be assault.

The band also use their newfound flexibility to expand their range, too. The aforementioned 'Sorry Dad,' is a lower-key, groovier effort than we're used to; 'City of Exploded Children', meanwhile, collars English folk and military drumbeats into a deranged bastard of a song. A personal favourite is 'Goals in Slow Motion': at first listen, it's the most straight-up verse-chorus-verse rock song on the whole album. Give it a few more listens, though, and awareness creeps in that the band may well be quietly taking the piss out of head-up beers-down Kasabian lad rock while also doing it a thousand times better than their contemporaries who make it their stock in trade.

Plus, the little treat at the end of the album simply has to be heard to be believed.

Finally, we come to what might be the finest-titled song this year – if not this decade. 'Fuck Off Robocop' is, basically, Future of the Left's entire musical philosophy distilled into less than three minutes.

It begins with spoken word intro; instantly spits into a brutal staccato stop-start crunch over which Falco berates the state of the film industry at the top of his lungs... then quiet quiet.. .STOP START rage and fury again. You'd think that was it. But as the song crests the halfway point, and Falco croons “One becomes two / Two become three...” 'Robocop' morphs into a rollicking rolling moshpit of a song, driven by drummer Jack Egglestone's awesome drumming. It's Future of the Left at its purest, and if you don't respond to this ditty then I worry that you're a bit dead inside.

'robocop 4 - fuck off robocop'. Our take on franchise film-making.

Ten out of ten, perhaps? No, not quite... If we chart the progression of the Falcobands, then Mclusky swam around the post-punk ocean, snapping at its rivals with razor-sharp teeth; Future of the Left v1 was the deranged beast that crawled from the water, taking unsteady steps and tentatively exploring this odd world; Future of the Left v2 is its bastard grandchild, an eight-legged four-mouthed mutant monster that's all teeth and tits and lizard skin, roaming the jungles and plains with new purpose, taking no prisoners.

This is Future of the Left's finest hour so far, no doubt, but I am certain that the best is yet to come as this monster continues to evolve.

Thank you, Future of the Left – you've saved rock music. Now to make it pay.