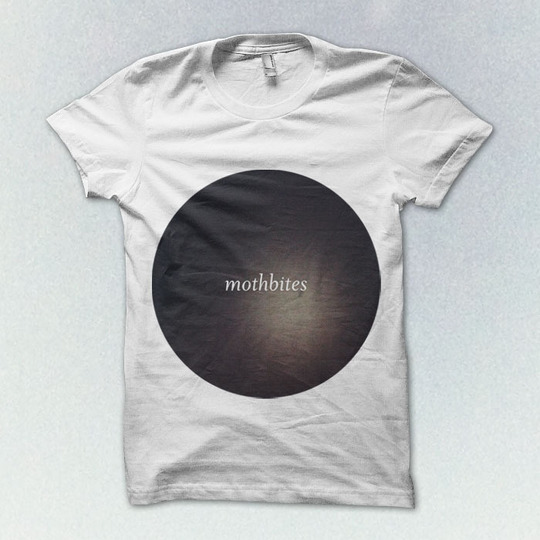 At hardcore shows across the country, something strange is happening. A man called Miles Coles is appearing with a guitar - acoustic - and entertaining crowds as they rest between moshing. Like a busker with access to a flannel and his own material, Coles has a gentle, amiable style, but sings with such scorn and seething anger that he’s seduced you before the venom hits you. He’s wrenched out three shards for his debut as Mothbites; an EP which is bound to send his hardcore fans into overdrive (it comes on hand-cut CD, and you get a free t-shirt!).

The mix of warm folk and sub-zero lyrics is introduced on ‘Howling Forever’, where Coles is joined by Thom Denson, releasing pain in the form of a slide guitar. This is a dark, dark piece, with Coles cawing about how the devil’s assumed his lover’s skin, and has conned him into bed like a sexy Jeffrey Dahmer. ”But the devil pulled away his mask and showed me / His face was my own,” he cringes, and runs off guiltily into the wild, now choosing to socialise with wolves. Imagine ‘Wicked Game’ if recorded by the Silence of the Lambs kidnapper, Coles’ voice cracking for the finale: ”I’ve touched myself and I’ve cut myself over / Re-raised these veins, tied up tight like I told you”. Suddenly it’s clear why all those angry ashen kids are hot for him - there’s more darkness in this rangy hick voice than in the whole New Murderers’ Tent at Rebellion.

‘What I Have Seen’ is a gentler take on low self-esteem, with the dusty guitar offset by Coles’ falsetto, a little electric work in the background. There are no suicide tips here: just a repeated sigh of ”We don’t know” and some steady keyboards. It’s a cinematic track, made for people crying and driving, which builds to a dramatic chorus, ominous as Alfred Molina in Boogie Nights. Comparatively upbeat, it’s the shortest track on the EP, and a break in the clouds before the monsters of ‘Foreign Ghost’. For this song, loosened guitar strings match the composer’s sanity, Coles giving us a slice of his shaking, staple-filled heart. ”My heart is a grandfather clock / Doesn’t keep time any more / It’s beating out in the hall / Covering its face with its hands / Exclaiming it now has a past again”. The singer paints himself as more shamed than Michael Fassbender, croaking up bile just to remind people he’s alive.

Confirming you're alive should seem easy when ringed by deathly teenagers, but Coles goes the extra mile, and in three songs has recorded some of the most sincere/forlorn lyrics since the Red House Painters said “Let’s party!” Barely in his twenties, it’s shocking someone so young could be this articulate - it’s as though Bonnie ‘Prince’ Billy made a wish on a fairground, and somewhere out there is a grown man running around with a teenager’s personality. He regrets as easy as he draws breath, but it emerges cryptically, not once in bad taste or with the feel of poverty porn. If he can stay this raw for a whole album he’ll have to be carefully handled and prepared, like blue steak. Delete all your exes and pulverise your sim card. Dispose of knives, wire and bleach. Find a teddy.