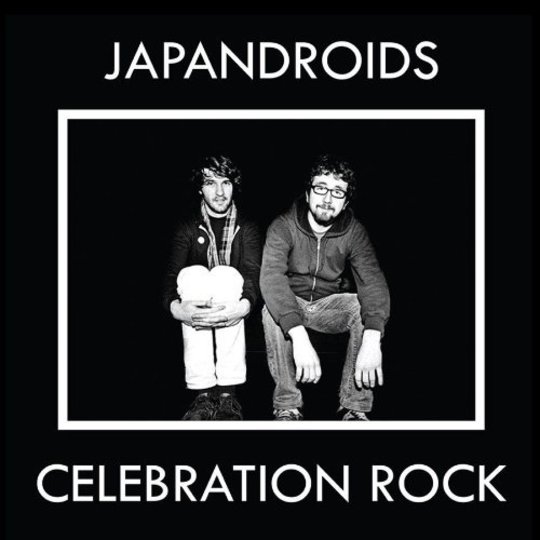 Most artists start grumbling about touring on their second or third album. Japandroids, however, dived right in on their first: Post-Nothing was a record which belied the duo’s knockabout image - and the presence of the odd superficially upbeat banger – to offer an introspective, reverb-heavy account of how life on the road is a headfuck.

Insofar as it’s common for bands to begin their careers with their most raucous, energised record and then start slowing down and grumping out afterwards, Celebration Rock sounds oddly more like a debut than Post-Nothing. The ‘rock’ part of the title is no word of a lie: the songs may still uniformly teeter between the four and five minute mark, but it’s an infinitely more forceful collection than its predecessor. David Prowse’s drumming is exponentially harder, the furious fills and constant explosive ratatat-ing suggesting he’s gained about a stone in bicep mass. He gives Celebration Rock a muscular weight that Japandroid in chief Brian King from having to prop up the bottom end with sullen guitar haze. The shoegaziness of Post-Nothing has been sloughed in favour of trebly riffs and ringing arpeggios that roar forward like a tank charge. The sheer energy pouring from this record is breathtaking: not until the very final song (‘Continuous Thunder’) does Celebration Rock’s sense of acceleration cease.

Sheer thrill of velocity is enough to counteract this record ostensible flaws. I could note, in passing, that as pieces of songwriting go the opening one-two of ‘The Nights of Wine and Roses’ and ‘Fire’s Highway’ are actually pretty ordinary. I could bemoan the relative homogeneity of the sound, that it’s a much less multifaceted record than Post-Nothing. And it’s easy to be slightly underwhelmed in principle by the fact there are only eight tracks here, one of which (The Gun Club’s ‘For the Love of Ivy’) is a cover, another of which (‘Younger Us’) was put out as a single two years ago. But the actual sledgehammer impact of the sound is such that none of this seems particularly relevant, like quibbling over the colour scheme of a dragster when the only point is the speed.

Certainly it should be stressed that some of these songs are pretty incredible: the wrenching chords of ‘Evil’s Sway’ turbocharge the eeriness of Post-Nothing’s more unsettling moment; and the second half is nigh on perfect, three immaculately anthemic blasts of heartlands hardcore - Adrenaline Nightshift’, ‘Younger Us’, ‘The House that Heaven Built’ – that finally grounds in ‘Continuous Thunder’, Celebration Rock’s one slow burner, a declaration of emotional uncertainty that finally combusts in a firestorm of drums. The only genuine bum note is that cover, a scratchy, tinny, whooping ball of punk that’s probably good fun live but doesn’t really hack it here.

As for the ‘celebration’ bit – what I love the most about Japandroids is how their music embodies so much that is exhilarating about rock’n’roll, and yet the emotions behind it all seem so conflicted. Celebration Rock feels less troubled and more emotionally distant than Post-Nothing, but even so you’d hesitate to say King sounds like a man in love with life. ‘Younger Us’ is as chipper as things get here, but it’s a song that yearns for good times past (“give me that night you were already in bed, said fuck it, and got up to drink with me instead”, runs the chorus). Elsewhere the present is uncertain: “Long lit up tonight and still drinking, don’t we have anything to live for? Well of course we do, but ‘til they come true, we’re drinking” runs the record’s very first verse; “death has no respect for love and youth no respect for me” snarls King on ‘Adrenalin Nightshift’; “it’s a lifeless life with no fixed address to live” runs ‘The House that Heaven Built’. It's not just mithering: before Post-Nothing belatedly took off the band effectively split up for a while in the fact of global indifference; when they regrouped the gods gifted King with a perforated ulcer that nearly killed him. In the words of Les McQueen, it's a shit business.

Japandroids simultaneously epitomise and critique the act of being in a wicked awesome cult rock band. It’s an approach that’s about a billion times more appealing – not to mention relatable – than some twat from the Seventies squawking about what a brilliant time he’s having. Perhaps the highest praise anyone can offer this band is to say they make worrying about rock'n'roll sound like the most rock'n'roll thing, ever.