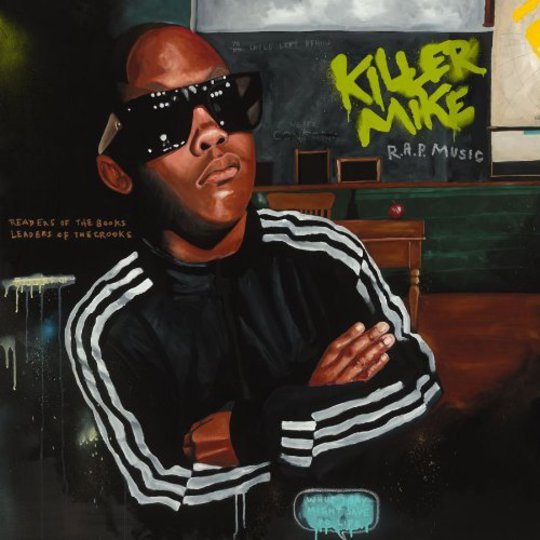 Probably best known in the UK, ‘til now at least, as a prominent member of OutKast’s squad of call-upon contributors – he dropped guest rhymes on both Stankonia and Speakerboxxx – Atlanta rapper Killer Mike has been actively releasing solo LPs since 2003’s Monster, his sole major label set. But none have connected with a collective consciousness wider than an already plugged-in sect, not in a fashion comparable to the dirty south-spotlighting commercial successes of Dré and Antwan.

R.A.P. Music, his sixth long-player, is highly unlikely to elevate his reputation to the level of the ‘Miss Jackson’-makers. But, as evidenced by its enraptured reception thus far, it is certainly stretching his admirable underground reputation into new audiences. Part of this ripples-becoming-waves reception is down to his single partner-in-production across these 12 cuts: New Yorker El-P, ex of Company Flow and celebrated solo artist in his own right. Mike’s last LP, PL3DGE, featured a fine array of desk-side talent: along for the ride were No I.D. and Flying Lotus, beside lion’s share-handlers SweatBox Productions. The hook-ups led to fine standalone end products; but a certain coherency was missing. The same cannot be said of R.A.P. Music.

Which isn’t to say that it compromises variety for cohesion – removed from context, heard in isolation from what connects them on this set, ‘Go!’ and ‘Ghetto Gospel’ could be from very different albums released at very different points of Mike’s career. R.A.P. Music’s sequencing, and the pacing it provides, is vital in the connection between artist(s) and audience here. At no point does it stall under its own weight; nor does the music become too light, lessening its first-, second- and third-impression impact. Take a three-song passage and it clearly exhibits appealing differences while presenting attention-maintaining parallels.

And doing just that… ‘Reagan’ is ostensibly a critique of the Iran-Contra affair, sampling the actor-turned-President as he explains to Americans how his own feelings and objective evidence don’t corroborate; but Mike zooms the camera in closely, to his own childhood, using a key political event of the period as a wider-world counter to at-home examples of discrimination.

‘Don’t Die’ furthers this exploration of racist oppression, but its caustic, confrontational stance is some distance removed from its preceding track’s Saul Williams-like poetic polemic. If you’ve read elsewhere that there’s a Bomb Squad feel to some of R.A.P. Music, this is the track most likely to have triggered such a comparison, Mike raging like Ice Cube in his prime while production straight out of Fear of a Black Planet pops like mortars around him.

‘Ghetto Gospel’ is a slow jam compared to what surrounds it, measured of wordplay and clear of pulpit-preached observations; it borrows a sample from De Le Soul’s ‘Say No Go’, but said interjection is the one instance of brightness on a piece that’s downbeat in the album’s grand scheme.

The other instance of introspection set to sombre music is ‘Willie Burke Sherwood’, a transparent in-memoriam for a departed relative – “I wish you never had go to … I wish you could see my life” – which doubles as a summary-to-date of his own overcome obstacles.

‘Anywhere But Here’ is perhaps the album’s weakest number, playing out like so many ‘featuring’ rap tracks with one eye on commercial matters by combining a very controlled Mike with chorus hooks from Emily Panic – swap the names involved for slightly bigger fish and you’ve a typical third single from any high-profile, major-label rap record. While lyrically interesting – “There are too many ghosts in this town,” calls Panic, looking across the wreckage of lives lost in nefarious circumstances in any given metropolis – it’s a plodding affair given the life El-P injects into so many other arrangements.

One such cut is ‘Butane (Champion’s Anthem)’, on which he delivers his one vocal spot. It’s punctuated by UK grime tics, and is a fine example of this album’s geographically ambiguous appeal. While rap is a movement often defined by location, R.A.P. Music is a collection that embraces the internet age’s boundlessness. Perhaps that’s to be expected, given the perceived sensibilities of Killer Mike’s southern scene and El-P’s New York neighbourhoods. What’s also expected is some of the crunked-up, bouncing beats synonymous with Atlanta since it carved its own hip-hop identity in the Eighties – and ‘Southern Fried’ delivers, going so far to nod towards OutKast with a repeated motif of “Ain’t I fresh? / Ain’t I clean?” between rapid-fire chatter about strip clubs and lobster tails. It is, as the man himself confirms, “funky shit”.

R.A.P. Music is one of the most compelling albums of its kind released for some time, albeit one that comes recommended with a caveat that one’s repeat-play enjoyment of it mightn’t last too long. That its release coincides with El-P’s own Cancer4Cure collection is unfortunate in one sense, as the New Yorker’s third solo set looks more likely to be a mainstay come the year-end best-of equations, equating studio inventiveness with inspired lyricism, while Mike’s is perhaps a little rougher about its edges thematically and occasionally bears the bruises of compromise. However, given the distance between these artist’s own worlds, the uniqueness of their paths to this point, it’s a remarkable end product to an inspired pairing – and the acclaim for one will surely reflect positively on the other.

As Mike claims rap music to be his religion on the closing title-track, it’s the final proof that this art is all he’s known, all he’ll ever know. And his own interpretation of scriptures first laid down over 40 years ago and in a state of flux ever since have never sounded more alive. This is jazz, this is funk, this is soul, this is gospel… but most importantly, R.A.P. Music is rap music, as fresh as it comes.