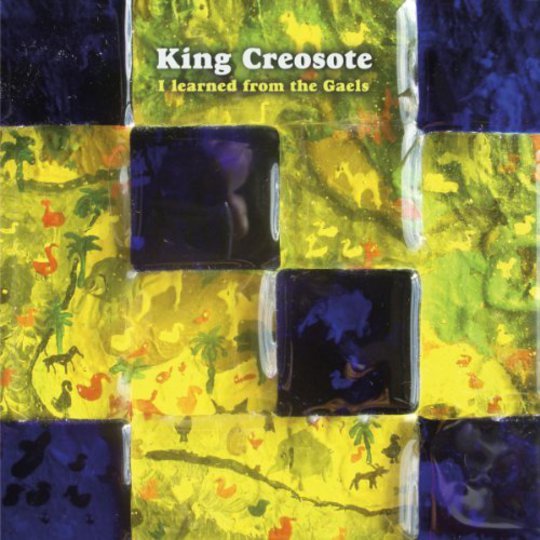 Even taking into account his surprising – but not undeserved – Mercury Music Prize nomination for Diamond Mine, Kenny Anderson remains one of the most underrated voices on these fair isles, his thick Fife brogue the vessel for immense poignancy and tenderness. But while Jon Hopkins’ languid soundscapes ensured Diamond Mine served as a fine showcase for that stupefying croon, I Learned From The Gaels emphasises a different side to King Creosote entirely.

Officially the King’s first solo release since the Mercury was handed to PJ Harvey last September, in reality it’s anything but, since the EP is above all a raucous document of collaboration – so much so that closing track ‘Little Man’ casts Anderson as a mere bit-part player, assisting Fence Collective cohorts Gummi Bako in reworking one of their own numbers.

Advocates of Anderson’s wistful melancholy may well find I Learned… something of a rude awakening, with the propulsive, disco-ish beat of lively opener ‘Doubles Underneath’ signalling a different mood entirely. While Diamond Mine suggested that he could sing the proverbial phone book and make you cry, the only tears to be had here are those of laughter, as he nails his musical colours to the mast with the warning, “Confiscate my early Eighties vinyl at your peril”. Embellished with cartoonish backing vocals, it’s knockabout for sure, but certainly not throwaway. The jaunty “skiffle ditty” ‘Single Cheep’ makes for a fitting companion – a touch insubstantial in itself, but a rollicking example of the ragged, barn-burning creativity of Anderson and his assembled cohorts, who here include Radio 1’s Vic Galloway as one of their number.

By the EP’s end, Anderson has subsumed himself into the collective completely, with the scuzzy bar-room workout ‘Little Man’ dominated entirely by the uncultivated lead vocals of Gummi Bako frontman Alan Stewart. But while having fun with friends is very much the name of the game, Anderson does still find some time to yearn, with lovelorn lament ‘Near Star Pole Star’ made all the more satisfying for the eccentric backing vocals of Fence’s resident sea-shanty purveyor HMS Ginafore, and all the more bittersweet for Anderson’s grim-faced humour – on being invited in for coffee, he notes, “She boiled the water / But had to hurl into the sink.”

While Diamond Mine often felt like a rather solitary record, I Learned From The Gaels is anything but, with its ramshackle glee a world away from Jon Hopkins’ atmospherics. But while it’s not an EP that demands to be cherished, it’s certainly one to savour regardless.