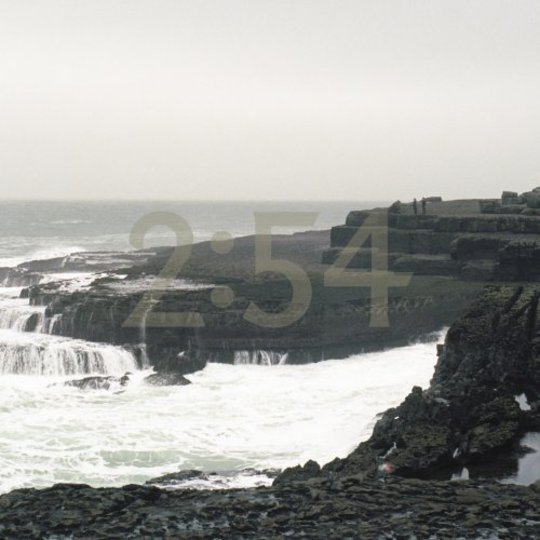 Rounded to two decimal places, there are 2.54 centimetres in an inch. I don’t know what this has to do with Colette and Hannah Thurlow, who decided to name their band 2:54, but it’s hard to imagine that they spent their school days memorising measurements in conversion tables. Listening to their self-titled debut album, it’s more likely that they spent their teenage years listening to The Jesus And Mary Chain, shopping for leather jackets and red lipstick and working their way through all seven seasons of Buffy The Vampire Slayer (thanks Wikipedia!).

Their music has a gothic quality to it for sure – not in the full-scale, white make-up, clumpy shoes, Marylin Manson sort of way that is, but in the same way that Joy Division and early PJ Harvey albums have a gothic quality about them. Goth chic, I suppose you’d call it, and it’s evidenced in the way ‘Revolving’ opens 2:54 with Hannah Thurlow’s choppy guitars, Colette Thurlow’s séance-like vocals and eerily windswept dynamics. It’s followed by ‘You’re Early’, which combines, er, choppy guitars, séance-like vocals and eerily windswept dynamics. By the time you’re nine tracks in and you reach ‘Ride’, with its choppy guitars, séance-like vocals and eerily windswept dynamics, you have to wonder: did 2:54 never dare to play around with the dials on their amplifiers, or was it simply that their local supermarket only stocked the ‘spooky forest’ Ambi Pur refills for their studio’s ambience-setting air freshener?

If you’re a glass-half-full kind of guy, you’d applaud 2:54 for constructing and sustaining such a vivid and impressive atmosphere around their songs, as so many young bands struggle to find a sound that’s all their own and unmistakably so. But there is a template to 2:54’s songs that’s hard not to notice, and while it’s no different to the way verse/chorus/verse templates are propagated in all contemporary pop music, you still feel that the Thurlows aren’t doing themselves justice as artists.

Like every band ever (probably), 2:54 are best when they break from their formula, whether it’s for just a moment or an entire track. The chanted vowels that bring ‘Revolving’ to a climax, for example, are ominously unusual, while ‘Sugar’s mechanical lead guitar lines are brilliantly cold and calculating. ‘Scarlet’ is like a homicidal maniac finding a fresh victim – pausing to ponder its humanity as Hannah Thurlow’s guitar drips like cold sweat, before a bloodthirsty riff starts tearing off pieces of flesh. Finally, the oh-so-savage ‘Creeping’ bursts through the album’s ambience like a madman’s axe through a bathroom door.

A bit too often though, 2:54 glides past without leaving much of an impression. A song like ‘A Salute’, though it fits in fine with the overall feel of the album, won’t haunt you in the way that the tense tremolo arm trickery of ‘Circuitry’ might. But then this is also an album without any major gaffes (save for the singer Colette’s out-of-character X Factor audition moment in the middle of that latter track), making it easy to enjoy, if not adore. Next time, we’d just like a little less 2:54-by-numbers.