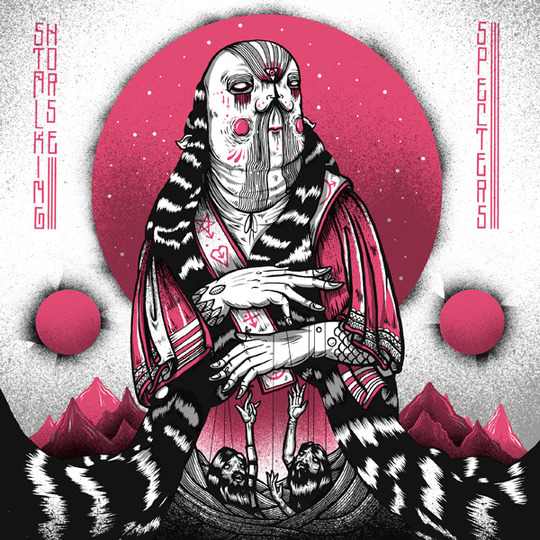 It’s an inviting beat. Somewhere between a march and a dance. The Pied Piper should have bought a drum kit instead of one of those cheap-ass magic pipes you can get down the market for a quid. This is definitely the beat that he’d have used to distract the city rats from their determined efforts to get inside people’s cavity walls and under their bathtubs. You hear the beat, you turn and follow. It ushers in a gentle howl of controlled feedback. And so Specters begins. It’s a concise lesson in how to convert an expectant crowd on first listen.

Once lured in. it is an album of brevities. Every time a song feels as though it’s on the tipping point of becoming a drawn-out, grandiose jam, it’s clipped, with perfect timing. Too much of a good thing becomes a gross thing; we know this. It’s like having your dinner taken away from you at the crucial moment that hunger turns to greed; you quickly learn to savour the taste. As each plate is carefully withdrawn, there is no more gorging on layers of sound. There’s no space for over-indulgence here; just the whispering, confident ambition that Wu (formerly of This Et Al) has brought with him to Stalking Horse.

Specters is also an album of variety. It may not be immediately apparent, as Wu’s voice is a commanding common thread that binds the various components of Stalking Horse. But mid-way through the experience, the piano-led ‘Mistress’ begins, lending the album an altogether lighter feel. It’s a highlight of the album, too, playing into the operatic tendencies of Specters. As Wu sings “there’s no food on the table / you’re laughing at his bedside manner” in his strangled, emotive falsetto, he conjures a gothic scene, begging for a dramatic stage play to soundtrack. This is the beauty of Stalking Horse’s debut; each track encapsulates a mood, tells a story and does so thoughtfully, deftly, with an artistry that is equal parts considered, eloquent and inspired. The mood of each track is treated delicately. Wu gives the story as much space as the sound, reigning in his distinctive vocal when it threatens to overwhelm, tempered with delicate piano riffs, haunting guitar lines, subtle, cushioned percussion.

Wu’s last band This Et Al were somewhat overshadowed by the dross that inevitably rises to the top when a city’s musical wealth gets plundered by those in search of a marketing plan. The voracious feasting on Leeds’ music, which occurred in the mid-Noughties may have left a bitter taste in Wu’s mouth, but it seems to have freed up other creative avenues; there’s a lightness of touch, here, a playful streak and a determined ebullience that marks Specters with a seal of quality. Now that he’s gathered up old comrades and cohorts (members of This et Al, These Monsters and Grammatics amongst them), Stalking Horse appears to be the sound of a man capitalising on healed wounds and a fresh self-sufficiency.