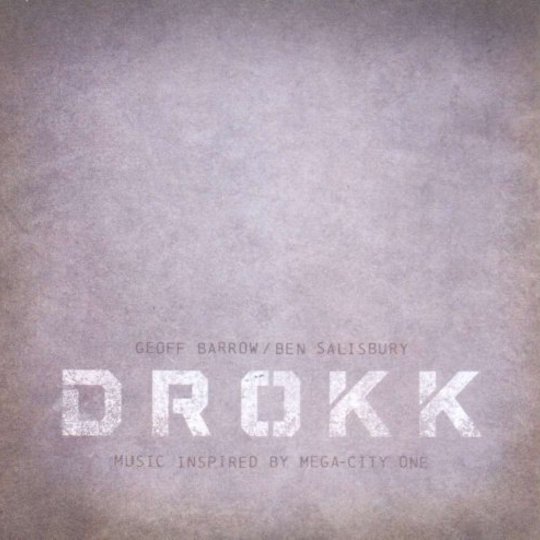 Is Geoff Barrow losing his edge? Ever since the boundary-pushing Third the Portishead maestro has been off the boil where the musical vanguard is concerned - shipping experimentation for retrograde passion projects that indulge his boyhood fantasies of 1st-wave kosmische (Beak>) and Nineties hip hop with the recent Quakers, while producing for Invada's very own post-punk Nico, Anika.

In collaboration with Brit film composer Ben Salisbury,DROKK finds Barrow again in retro mode, exhuming Eighties darkwave in order to dream up the sound of Mega-City One, the futuristic setting of his fave comic as a kid - the Judge Dredd-toting 2000AD. Taking the form of a 'fictional' film soundtrack, true to form it's a strong set. But the overriding feeling is that the once trailblazing Barrow is becoming complacent in middle-age. Because DROKK feels hackneyed. Not a word you'd usually associate with the Bristolian.

Predictably, Barrow is like a fish to water in these sci-fi surroundings, while Salisbury's experience on big-budget nature programs brings a widescreen lyricism to Barrow's brand of industrial severity. But the approach is heavily indebted to existing sci-fi soundtracks (Blade Runner's 'end theme' is riffed on roughly ten times, as are several proto-EBM chase sequences) as opposed of how the duo claimed to have been inspired (the clue's in the title): as an organic, direct result of the comics.

But not only that, in terms of popular music, DROKK trails even the revivalists, let alone the original post-punk progenitors of the Eighties. With the recent rise of coldwave, minimal-wave, reforming greats like John Foxx, Detroit techno cyberpunks like Zweshenweilt and the John Carpenter-inspired Gatekeeper, DROKK arrives at the tail-end of a saturating boom in raw, retro synth music. Meaning it's overly familiar. Neither does it add anything new to the canon.

That aside, atmospheric and perfectly realised, it's a treat for fans of classic tech-noir scores (or the Knightrider theme tune). Though it may be a shopworn idea, of all the many artists who've taken inspiration from Blade Runnerin the last decade, from Zomby ('Tears In The Rain') to the excellent Kuedo to um... Editors, it's Barrow and Salisbury who are able to replicate the film's feel - that exact balance between PK Dick-ian paranoia and Cold War dread. There's the reoccurring suggestion of whirring helicopter blades (if paranoia had a sound, that would be it), which takes you right to that corporate-owned futurescape (standard metaphor for Thatcherite Britain), monitored by those sinister surveillance machines overhead - the Huxley-prophesied 'eyes in the sky'.

Nineteen eighty-two, cinema's definitive year for sci-fi/fantasy, offered soundtrack music that, 30 years on, sounds almost mythic. Enhancing the effect, DROKK seems treated in a subtle ageing agent, as if bathed in the soft-focus glamour of a Drew Struzan poster. It's a patina of authenticity that serves to make DROKK a whole heap more evocative. The album's big centrepiece, on the Emeralds-esque 'Exhale' it's easy to envision the mile-high city, as on approach it rises up out of the wastelands - hover cars insignificant against the sprawling vista.

The rest is unexceptional. Although the album shows impressive range - toggling back and forth between insidious ambient ('Dome Horizon') circuit-bending noise ('2T(fru)T') and a kind of stroboscopic speed-drone (the aforementioned 'chase sequences'), much of the textures and tech you could find in commision across the Captured Tracks and Wierd Records catalogues. Except with Led Er Est, Blank Dogs etc you get the added bonus of pop immediacy and a bit of performance.

It's possible DROKK will serve as the duo's calling card to Hollywood, where Barrows might flourish in the touted resurgence of synth scores, following the sleeper success of the Drive soundtrack. But when he's done having fun, on return to avant pop-smithery Barrow needs to leave pastiche to lesser spirits.